This Low Carb Chicken Skillet Meal is easy, delicious, and a perfect keto dinner. Because this low-carb meal uses only one pan, it makes cleanup a snap. Everyone will love this tasty comfort dish with chicken thighs, riced cauliflower, and fresh green beans. 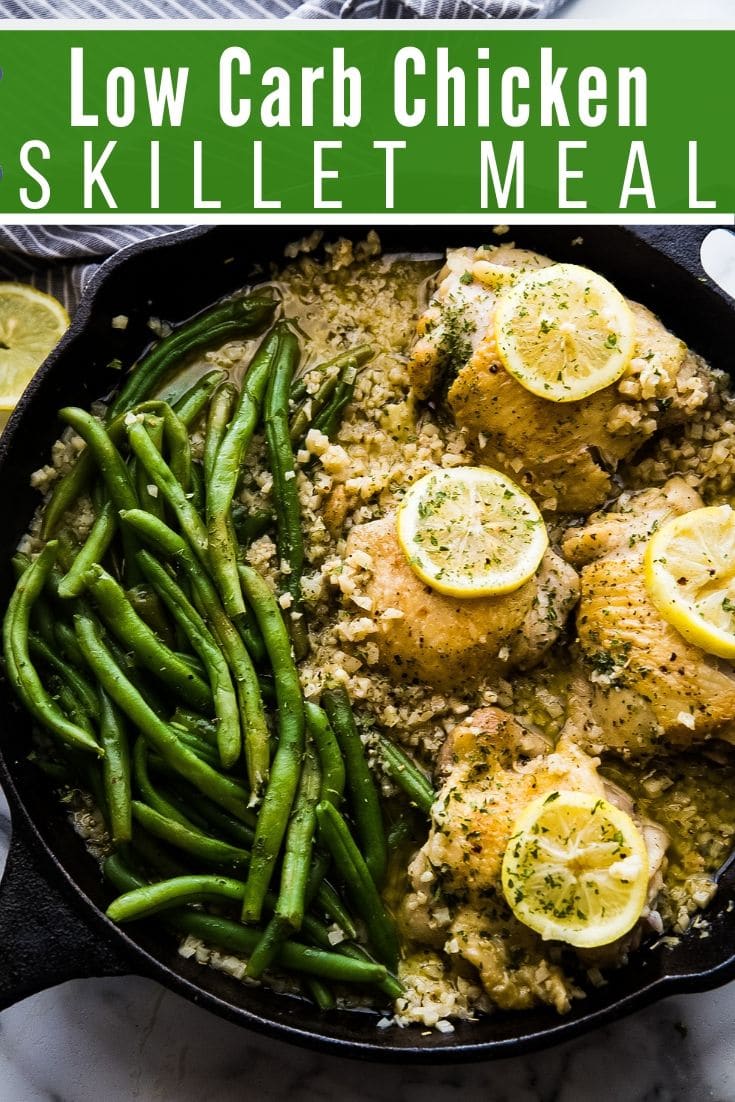 This is one of my favorite healthy chicken skillet recipes. The cauliflower rice in this recipe is cooked in a sauce that I modified from one of my grandmother’s recipes that I found in an old church cookbook. My grandmother taught me at a very early age to love cooking. When I was little, I’d stay at my grandparent’s house while my parents were working. We’d start our day in the summertime by picking fresh veggies from the garden that we’d later cook for dinner that night. I’m so thankful for my southern roots in the kitchen and how she so lovingly and patiently allowed me to be part of her day.

I remember her baking chicken in this sauce many times. I modified her recipe to make it keto-friendly, and it does not disappoint. This recipe is incredibly flavorful and adds extra life to the typically bland cauliflower rice while keeping the roasted chicken extra moist. This cast-iron skillet chicken thigh recipe is delicious, and as a bonus, it brings back so many memories of my grandmother.

Do I Have to Use a Cast Iron Skillet for This Recipe?

The short and easy answer is no, any skillet will do. However, I love cooking with cast iron skillets as they provide many benefits that I’ve outlined below:

For this recipe, I suggest using a 12 inch cast iron skillet such as the one pictured above that I found on Amazon at a great price.

You’ll find a step-by-step tutorial below, as well as a video to walk you through exactly how to make this delicious cast iron chicken skillet meal. 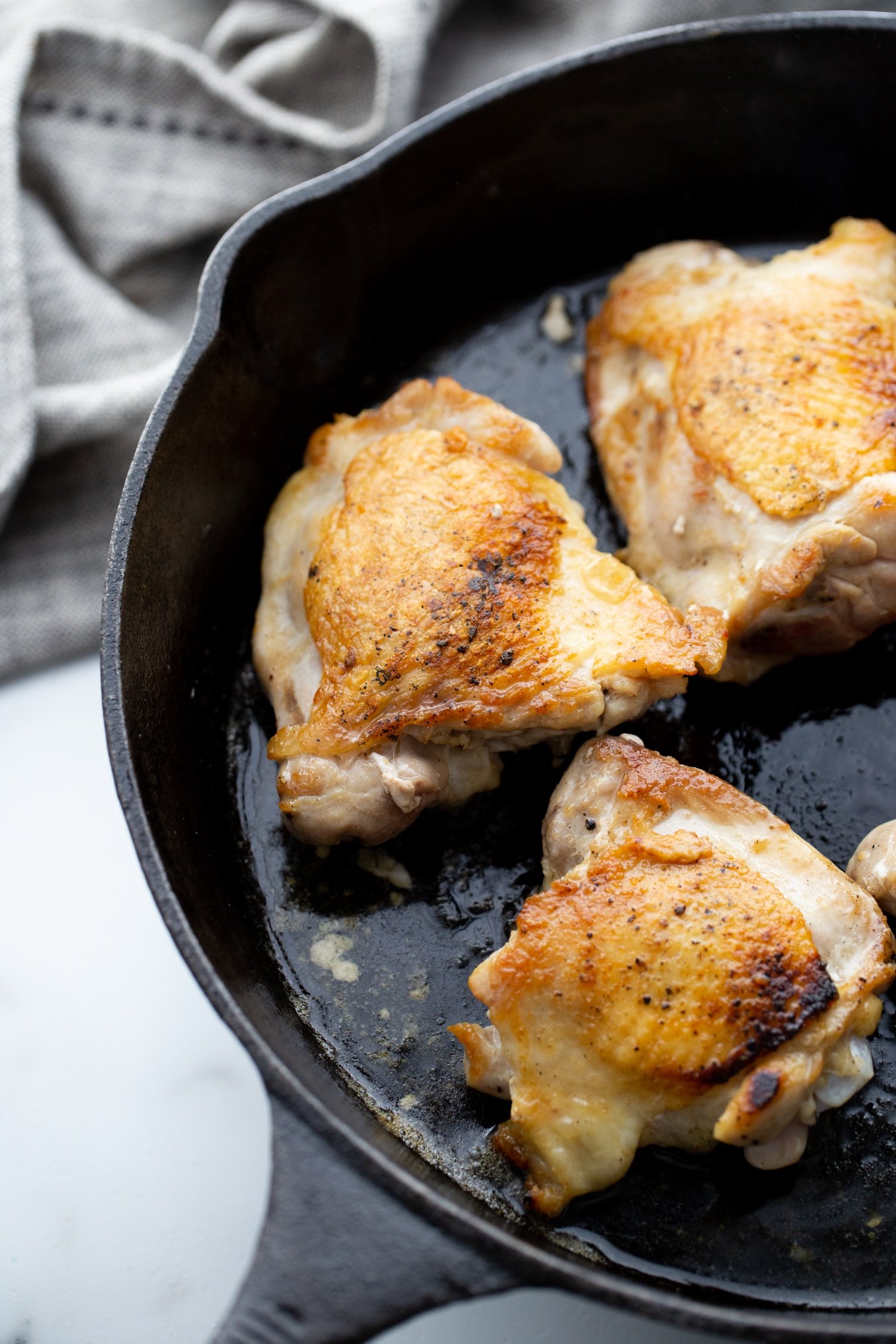 How to Cook Chicken in a Skillet?

Heat olive oil in a skillet to medium-high heat and allow it to get hot first, then add chicken breasts or thighs to the cast iron pan. Leave the chicken on each side for 4-5 minutes before turning. While you are searing, it’s essential to leave the chicken and don’t attempt to turn it over; otherwise, it will stick to the bottom of the pan. It also allows the chicken to get golden brown and crispy. If the chicken does stick, go ahead and finish browning, then follow the steps listed below to deglaze the bottom of your pan.

How to Deglaze a Pan

Add chicken broth to the bottom of the pan while it is still hot, then stir around and scrape the bits of chicken that are stuck to the pan. Don’t throw out the brown bits of chicken; they add fantastic flavor to the riced cauliflower. 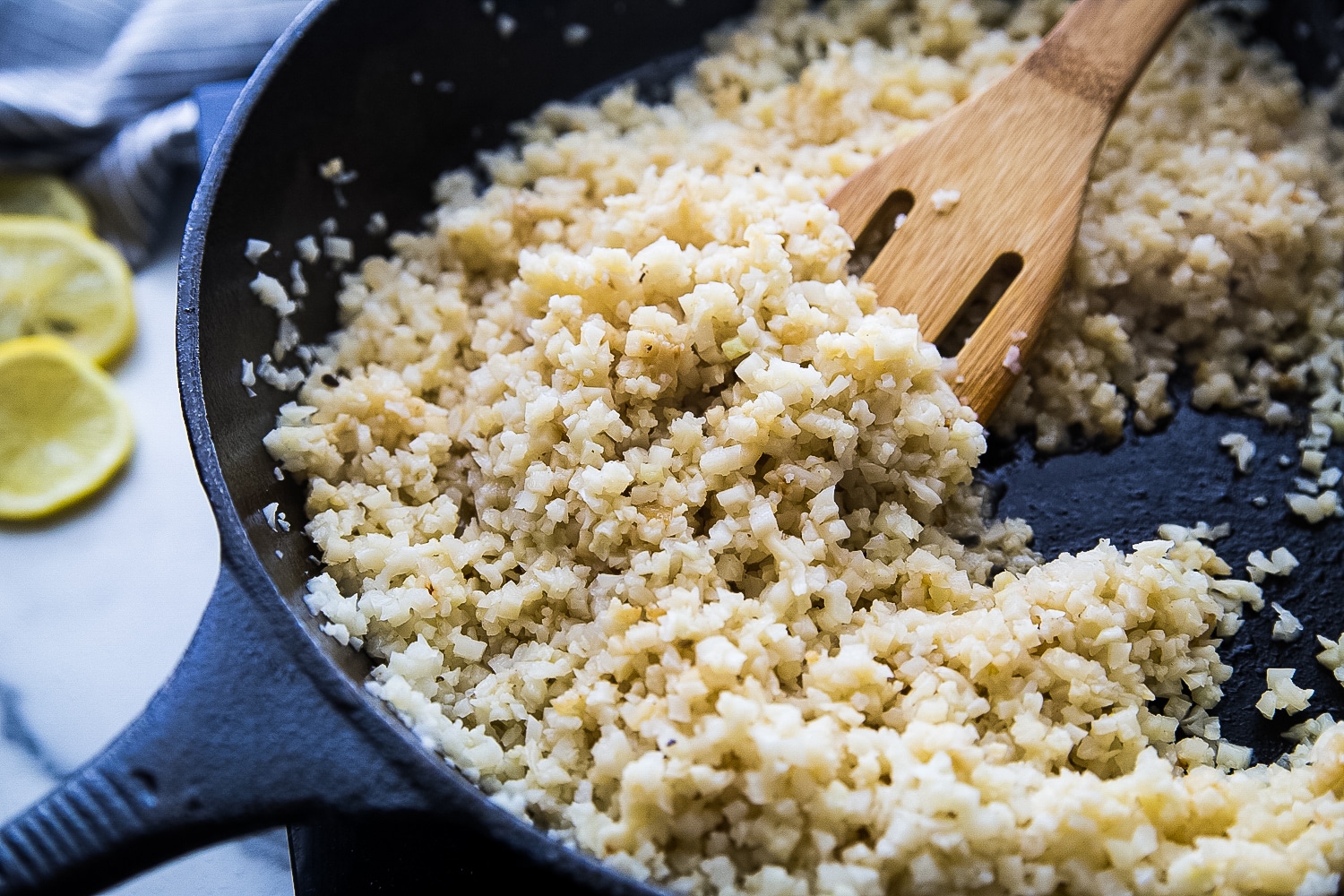 Cauliflower can be bland and mushy, but frying it in butter with seasonings made it so tasty. Almost everyone in my family loves this dish; in fact, this is my oldest daughter’s favorite way to eat riced cauliflower. The only one who doesn’t is my son, who hates cauliflower no matter how it is prepared. 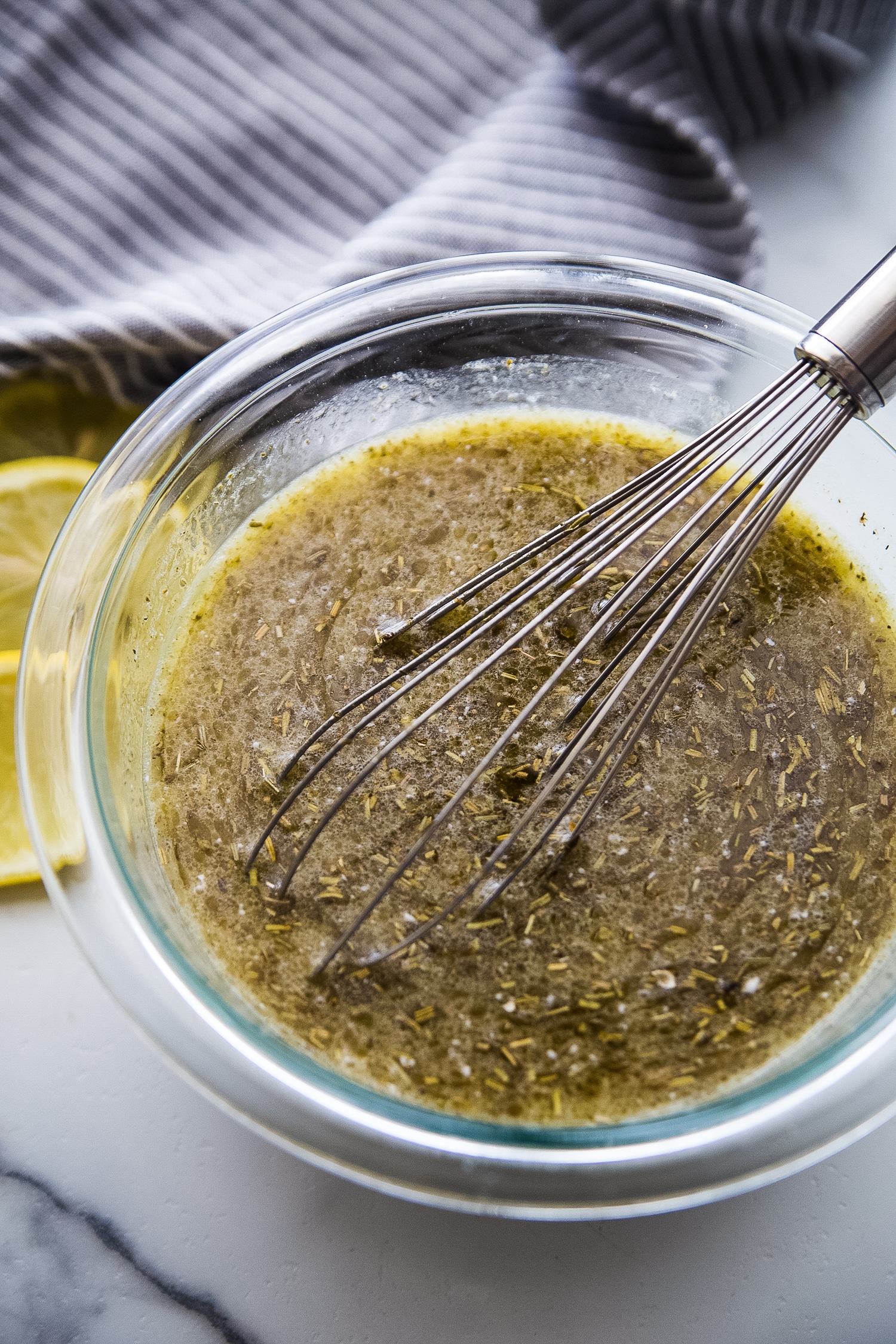 Don’t be afraid of spices; they add layers of flavor to this low-carb chicken skillet one-pan meal. The seasonings in this chicken go beyond salt and pepper to incorporate herbs like rosemary, oregano, and poultry seasoning for a bold punch. 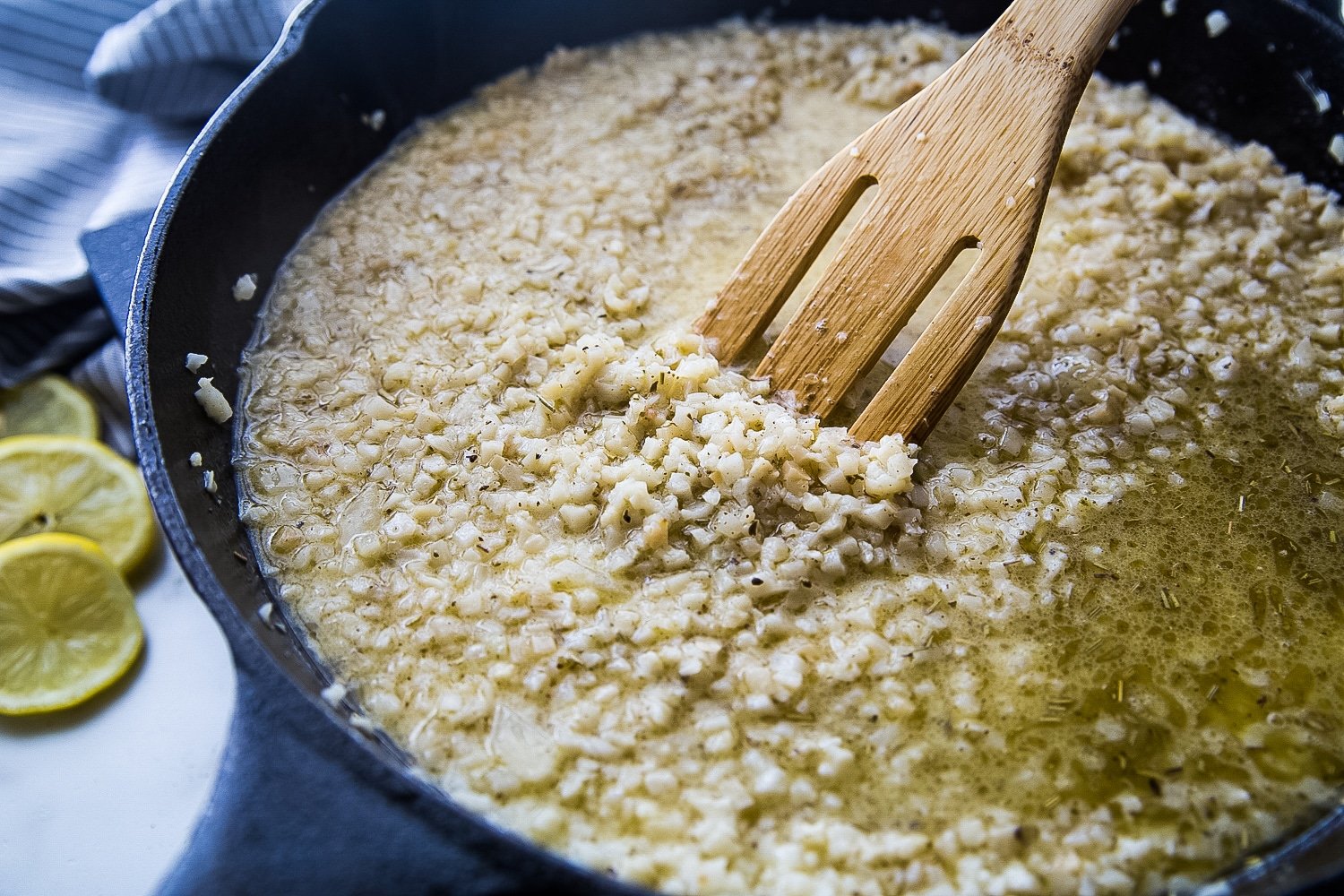 Pour the rich, savory sauce right on top of the cauliflower rice and bring it to a boil. Allow all of the spices to mesh together by simmering. 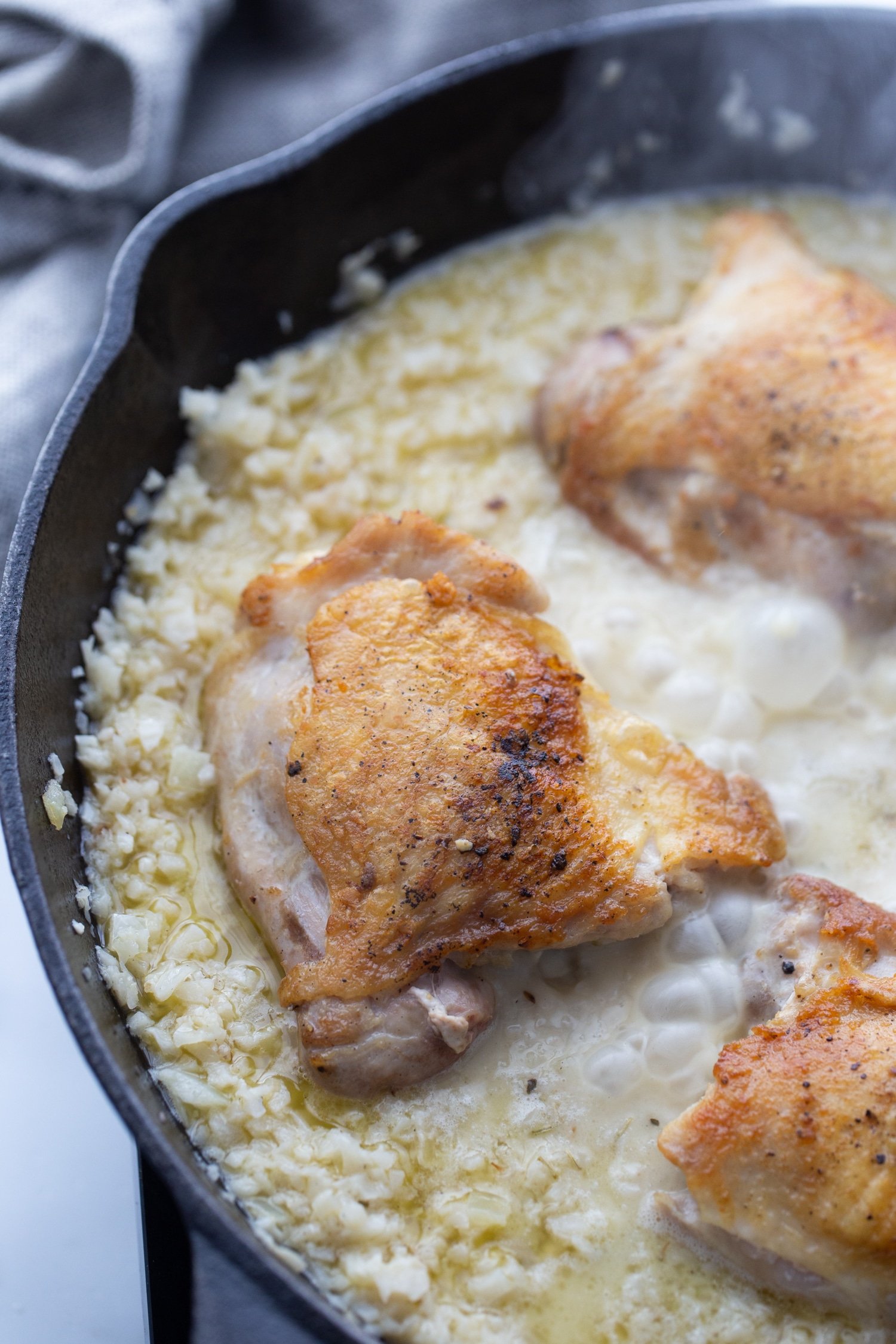 Add the chicken thighs back to the cast iron skillet with lemon slices on top. You will continue to simmer the chicken and the cauliflower rice in the sauce so that the chicken cooks all the way through and the sauce thickens up a bit. 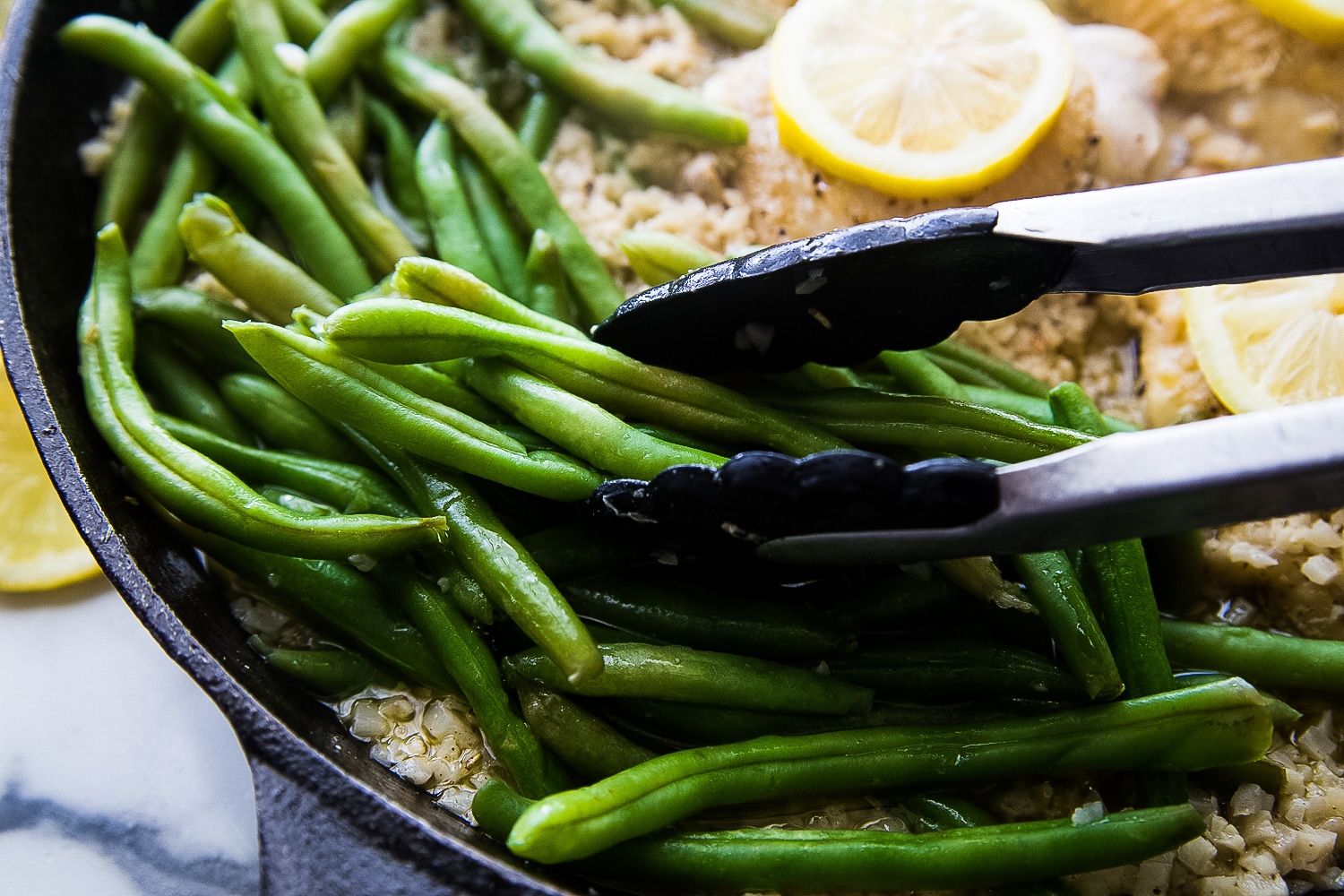 While green beans are technically a member of the legumes family, which many avoid when following a keto diet, they are much lower in carbs than other beans. One cup of green beans has seven grams of carb and 3 grams of fiber, making it four net carbs per serving. In short, green beans are keto-friendly. Enjoy! 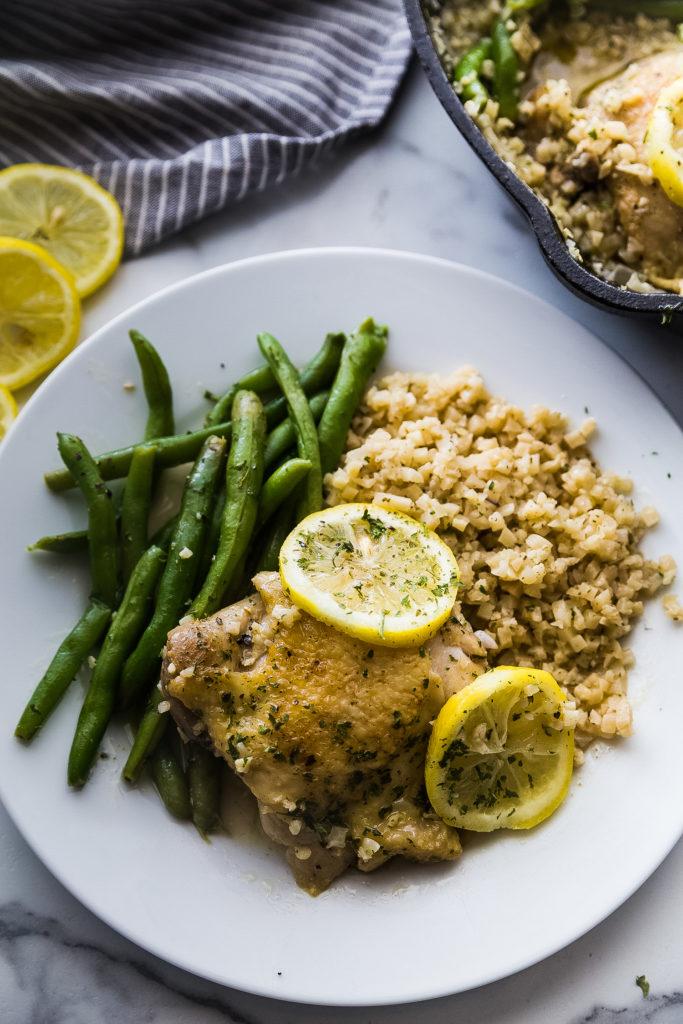 Yum! I’ve tested this recipe at least four times the past month, and it is delicious! I love that everything cooks together, making clean-up a snap without skimping out on an incredible keto meal.

Can I Use Chicken Breasts in This Recipe?

Sure! You can use boneless skinless chicken breasts or even skin-on split chicken breasts in this recipe. I would recommend using a digital meat thermometer to test doneness. I am prone to overcooking chicken without one.

Don’t miss any recipes like this Low Carb Skillet Chicken Recipe. If you aren’t already following my Easy Keto/Low Carb Recipe Page on Facebook, I post all my new recipes and content here. Follow me on Pinterest for inspiration, recipe ideas, and more low carb/keto recipes here. If you are just getting started following the keto/ low carb diet and would like more information, tons of fantastic resources and help are available. Amazon also has several excellent books you may want to check out here. 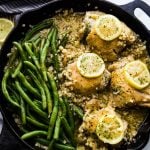 The nutritional information for the recipe is based on six servings; however, the number of chicken thighs may vary in a 1 1/2 - 2 lb package. When I created the recipe, the package I used had 6 servings while the video and pictures in this post show 4. 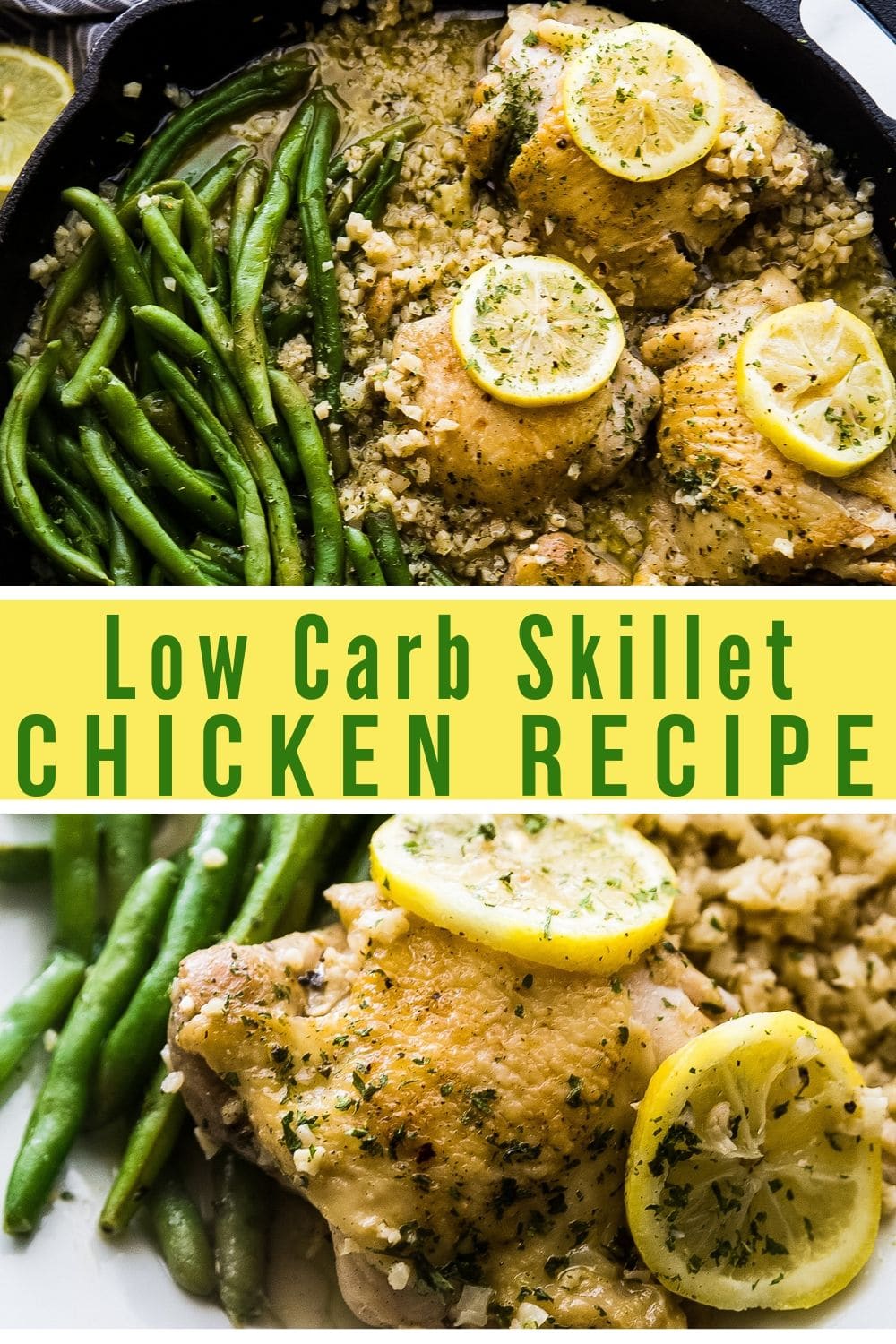 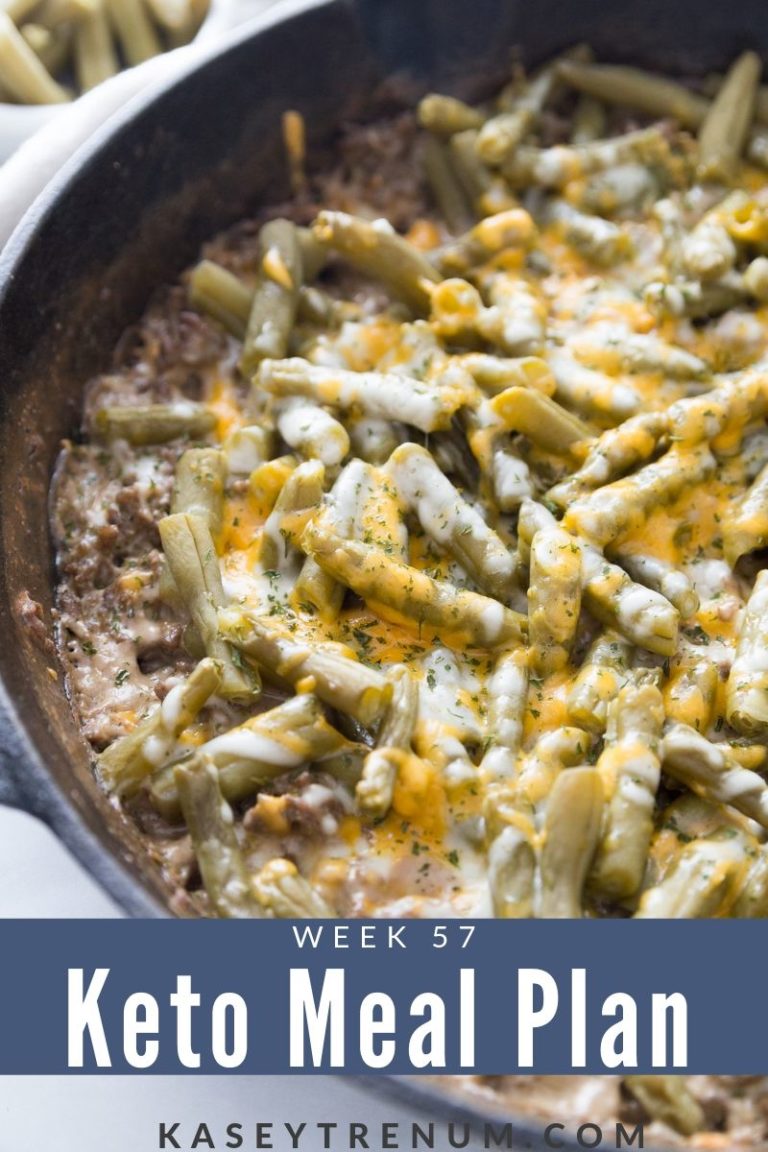 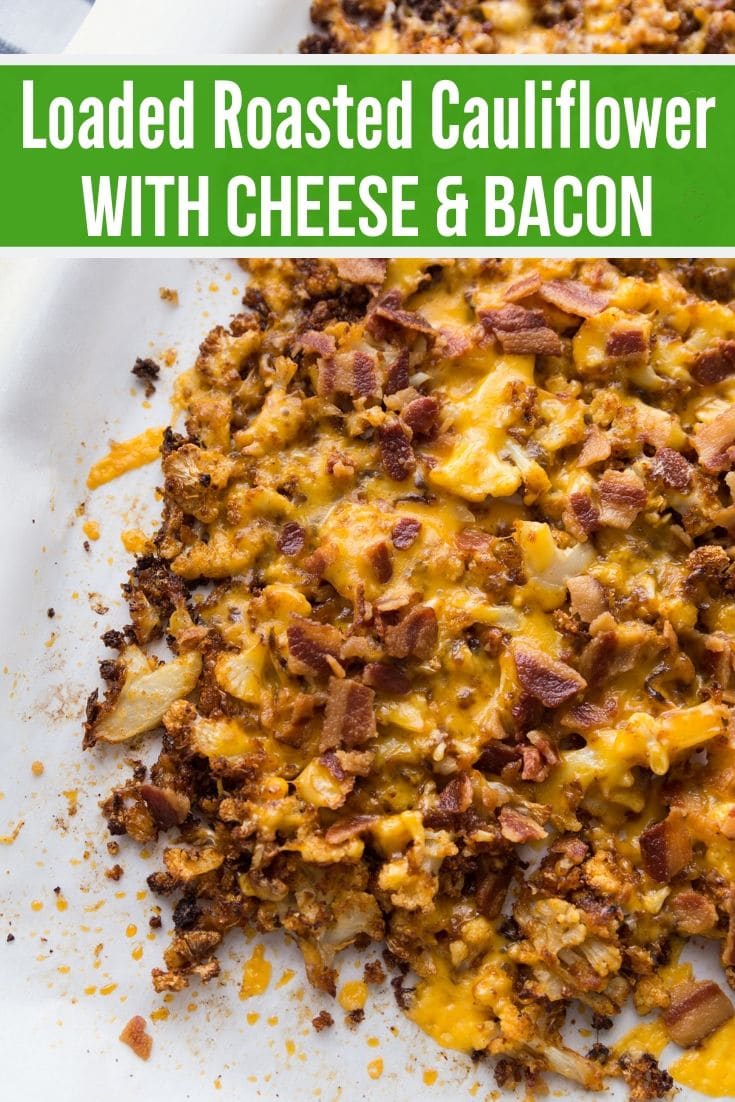 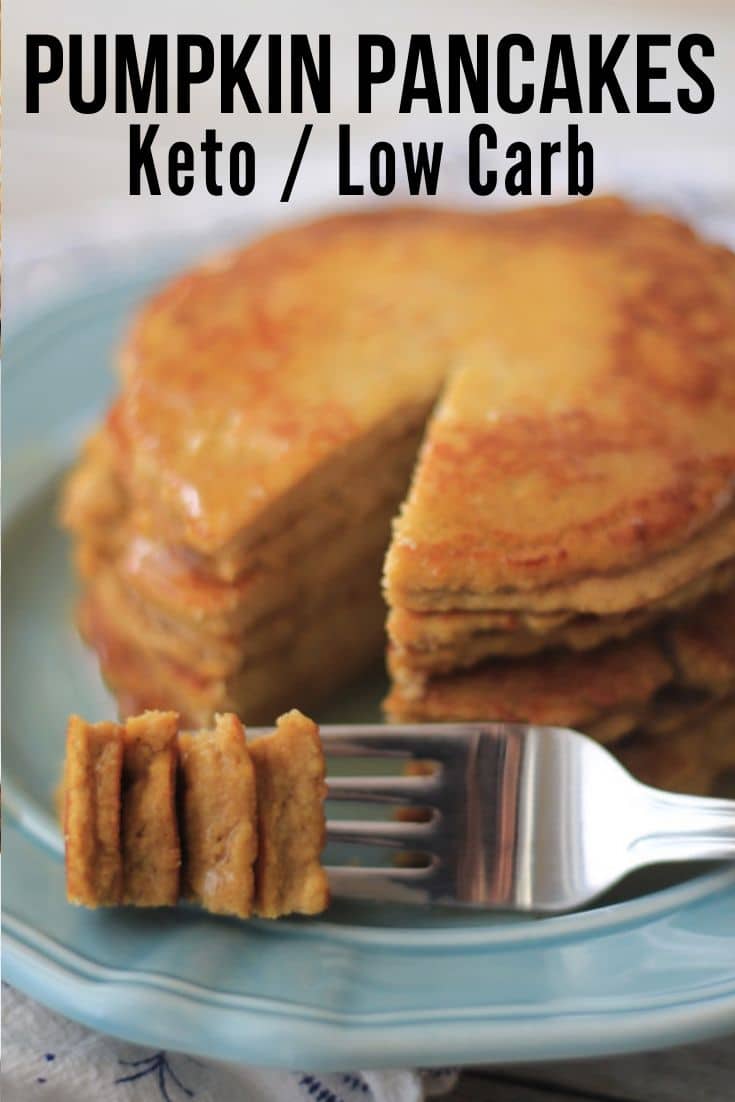 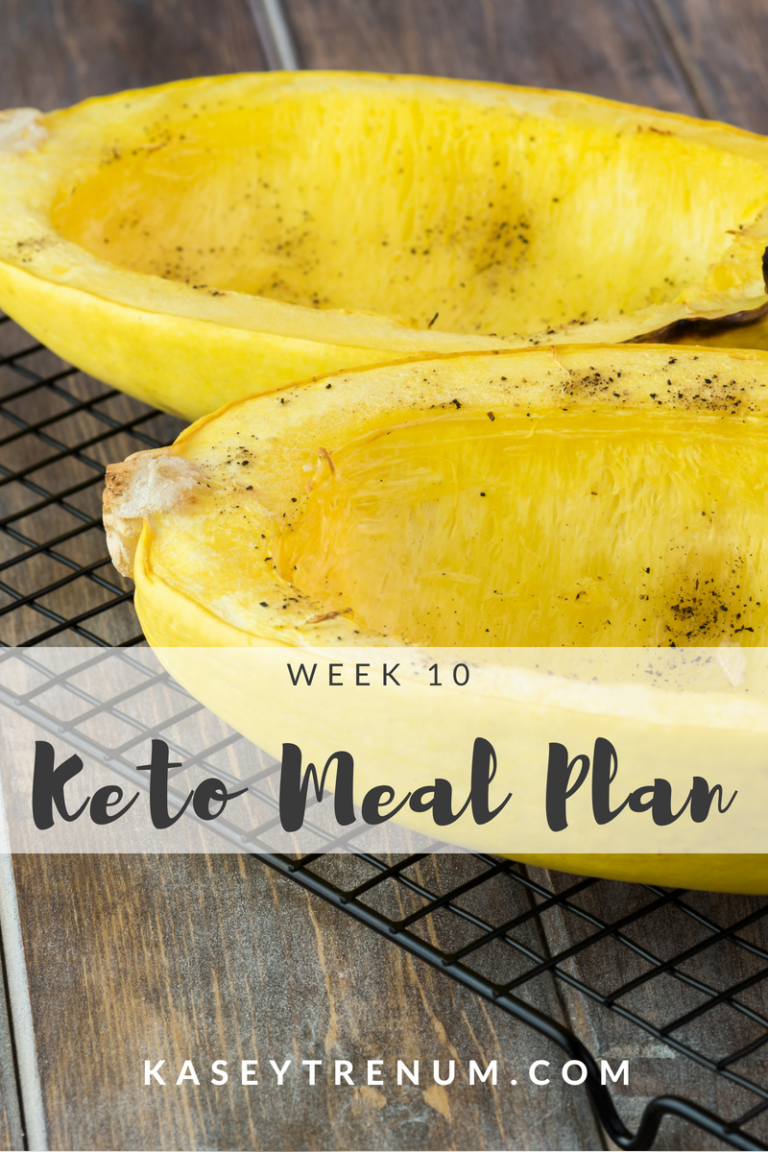 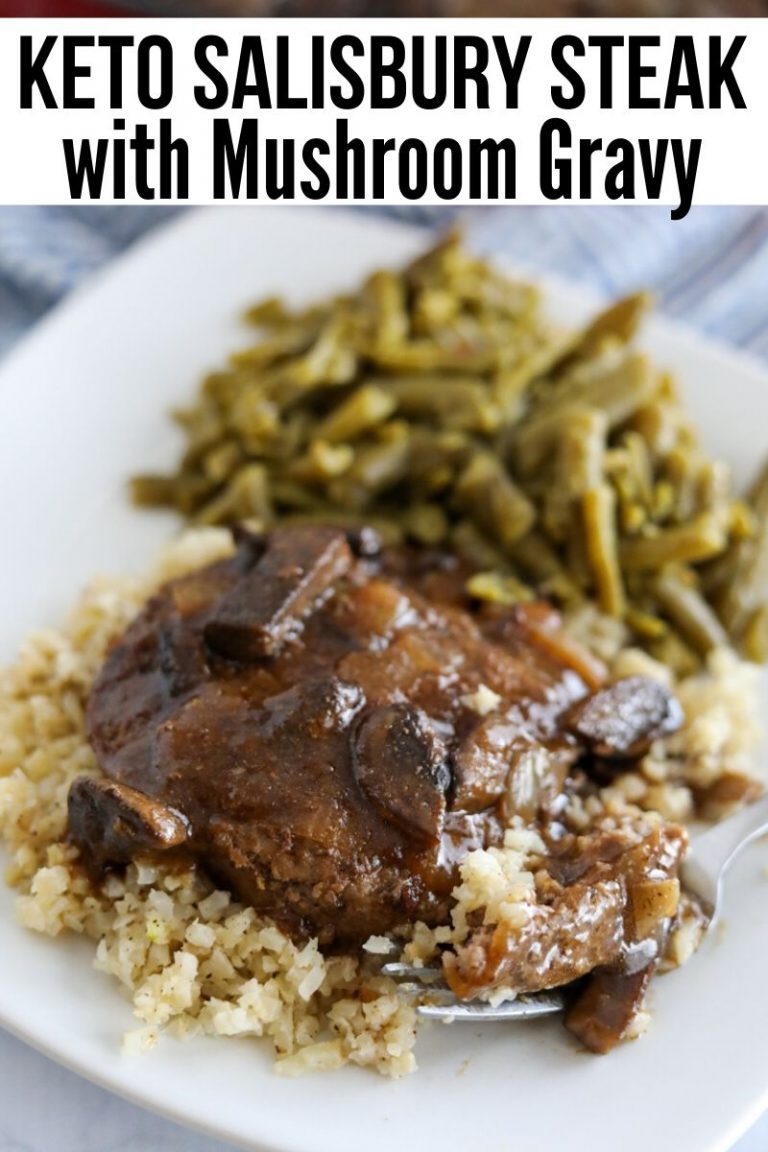