Looking for the perfect centerpiece for your Holiday dinner table? You will love this Best Keto Baked Ham Recipe with an incredibly flavorful sugar-free glaze. 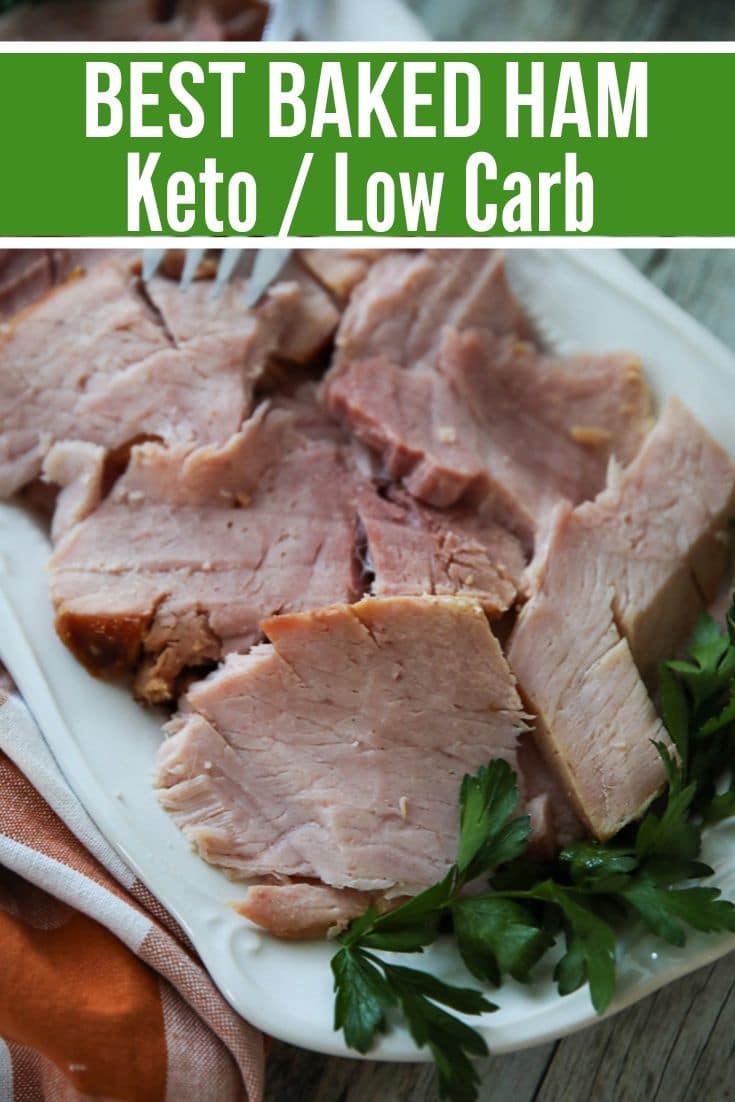 When I think of a Holiday dinner table, I see a beautifully carved ham in the center, surrounded by delectable southern side dishes. I love ham at every holiday throughout the year.

The only problem is, the typical ham glaze is full of brown sugar, and I wanted a low carb version. I came up with a keto ham glaze that is delicious. This baked keto ham recipe is perfect for Easter, Thanksgiving, Christmas, or any festive family feast.

Ham, in its natural state or smoked ham, is low in carbs and high in fat. There is a little sugar used in the curing process of ham. You will see it listed on most nutritional labels as dextrose, but it is minimal, and the amount can vary from brand to brand. If you are super strict keto, you may want to look for an uncured ham at a health food grocery like Whole Foods.

Traditional honey glazed or brown sugar glazed hams are not keto-friendly. However, in this recipe, I make a keto-friendly glaze for this Keto Baked Ham with Lakanto Monkfruit Golden that is amazing!

What Kind of Ham Do I Buy?

I used a 10-pound bone-in fully cooked smoked ham. Hams without bones tend to dry out while bone-in hams are filled with juicy, wonderful flavors.

Should You Let Ham Get to Room Temperature Before Cooking?

Do You Remove the Fat Layer?

Removing the fat layer from a precooked ham is a controversial question. Some people remove it while others do not. If you are one who likes the fat removed, it can be trimmed before cooking the ham or just before glazing. The fat will be easier to trim if left on while cooking. Trimming the fat layer makes a prettier ham when done, but leaving it on will help to seal in all the juices and will provide an incredibly moist and delicious keto baked ham. 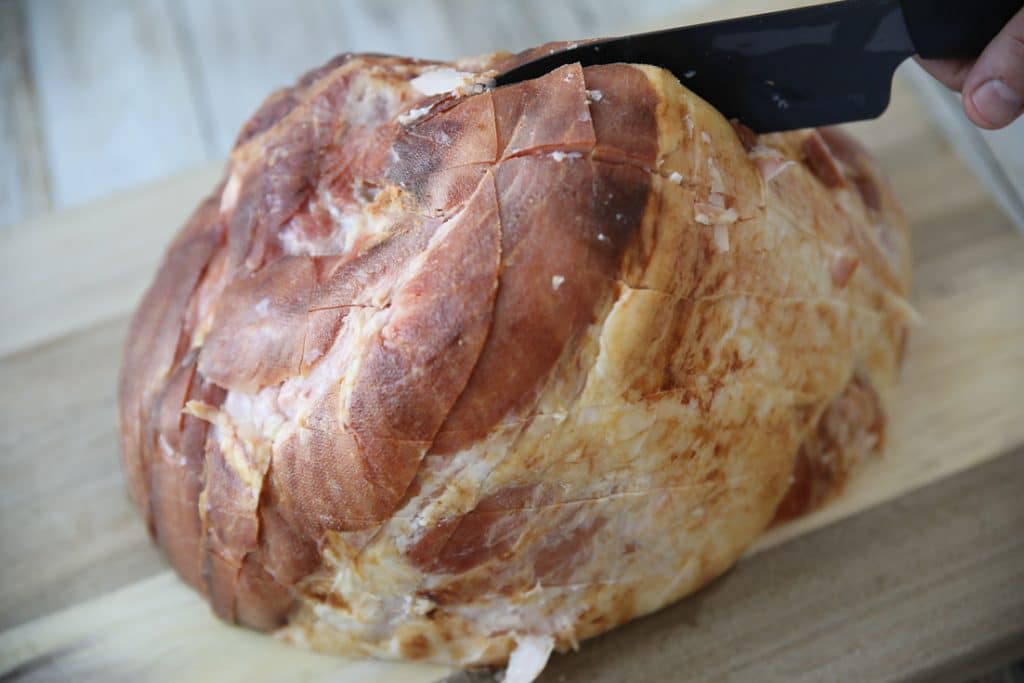 How Do You Score Ham?

Score the ham by making diagonal cuts with a sharp knife in the fat along the sides of the ham at approximately one-inch intervals. Then cut in the opposite direction to form diamond shapes. If desired, cloves can be inserted into each diamond for flavor and to make the ham more decorative.

How Long Do You Bake a Precooked Ham?

As its name implies, precooked ham is fully cooked. By placing the ham in the oven, you’re simply warming the meat to bring out its flavor and aroma. Of course, applying the keto glaze lightly caramelizes the meat’s surface and makes it so tantalizingly delicious.

Varying instructions online suggest following the exact instructions found on the packing of the ham you purchase. The ham I bought said to cook it 15 to 20 minutes per pound at 325 degrees or until it reaches a temperature of 140 degrees. Heating the ham too long or at too high a temperature will cause it to become dry.

Adjust your oven rack to be in the middle of your oven with no racks above it, so it accommodates a large roasting pan for this keto ham recipe. I did not realize I had given away my roasting pan while cleaning out, so I picked up this disposable pan at the grocery store.

Do You Cover a Ham When You Bake It?

Yes, tent your precooked smoked ham with tin foil, wrapping the foil to the edges of your baking dish. If your baking dish doesn’t have high edges, make the sheet of tin foil big enough to wrap over the ham, and under the baking dish, so it remains tightly sealed while baking. Tenting the ham will keep it from drying out. Remove the foil during the last part of baking this mouthwatering keto ham recipe.

The photo above shows the ham partially covered. I added another piece of foil to the side that wasn’t covered. 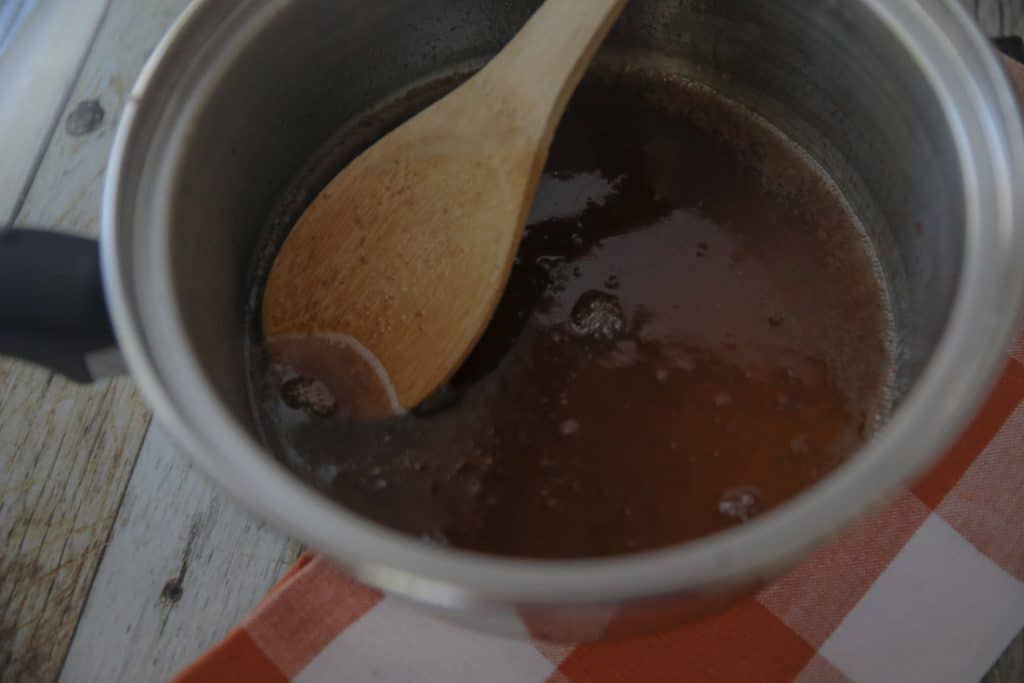 How Do You Make A Keto-Friendly Glaze?

When I decided to make a keto-friendly glaze for the ham, I knew I would use Lakanto Monkfruit Golden. It is such a great substitute for brown sugar because it contains zero net carbs, zero calories, and is zero-glycemic. Along with other spices, I also used Lakanto Sugar-Free Maple Flavored Syrup, which is sweetened with Monkfruit. This added a touch of maple flavor to this mouthwatering baked keto ham recipe.

For those who are gluten intolerant, no worries, as the glaze is gluten-free. This heavenly keto recipe glaze will work its magic into the ham while baking.

Tip: Don’t boil the glaze on high as it can scorch quickly. I had to throw out two batches before I realized what was happening. 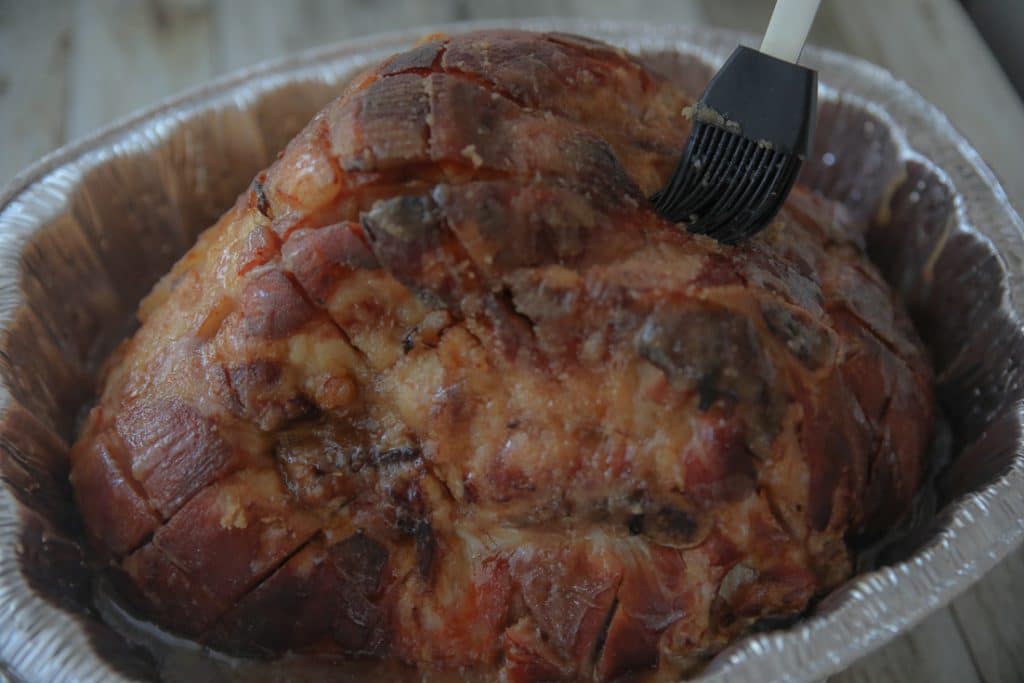 I find it easier to use a pastry or basting brush to glaze into the scored parts of the ham. The low carb keto glaze gives the ham an irresistible, incredible flavor. The baked keto ham smells as good as it looks!

Tip:  Before carving, the ham should set for 10 to 15 minutes after it is removed from the oven. This allows the juices to be redistributed throughout the ham, making it firmer, juicier, and easier to carve. 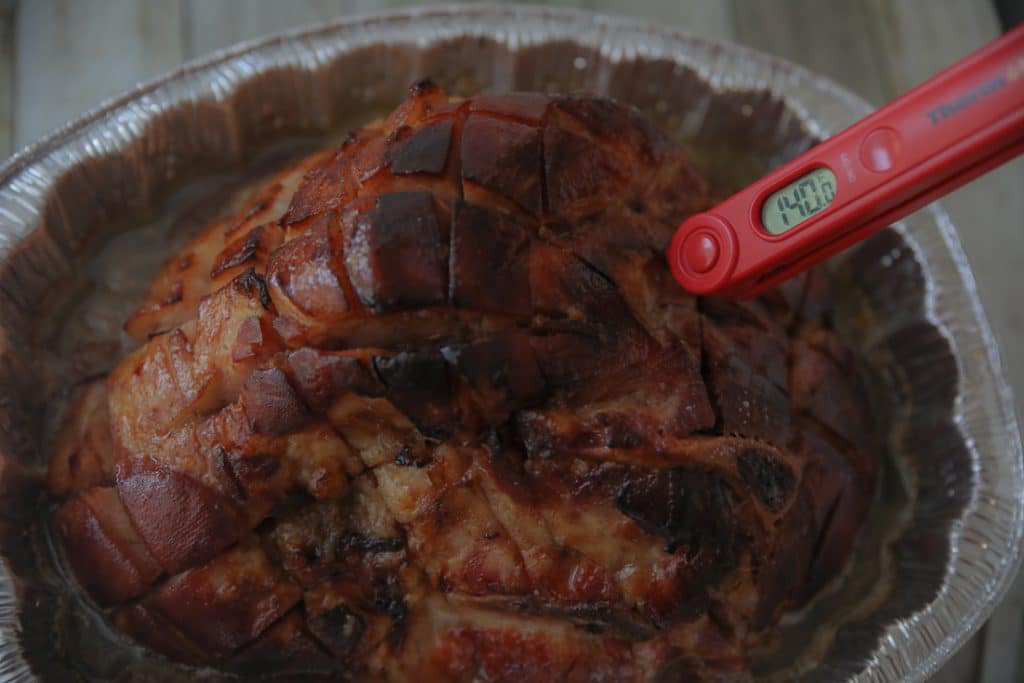 What temperature should a cooked ham be when it is ready?

Using a thermometer is the most accurate method for testing doneness. Remove your ham from the oven and immediately insert the thermometer, so the tip is in the thickest part of the ham and not resting in fat or touching the bone. The internal temperature should be 140 degrees Fahrenheit. This temperature accurately lets you know the baked keto ham is thoroughly warmed.


How Much Is a Serving Size of Baked Keto Ham Recipe?

The serving size for a bone-in ham is approximately 1/2 to 3/4 pound per person so a 10-pound bone-in ham would feed approximately 14 to 20 people. Of course, most people want seconds, and even thirds, so you need to adjust your ham size accordingly. 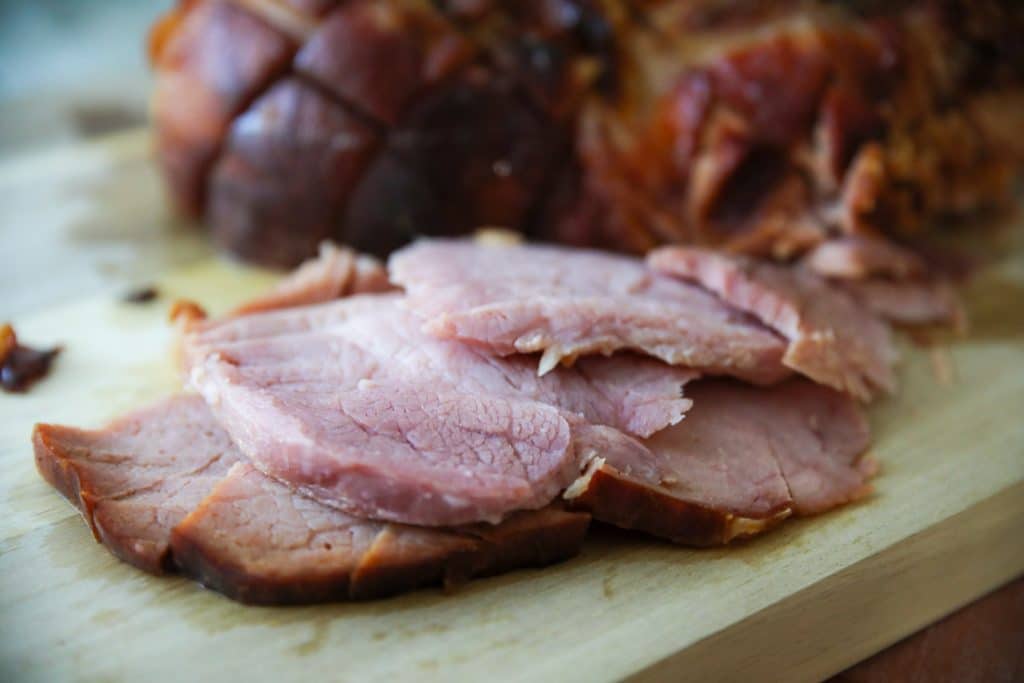 How Do I Store Leftover Ham?

Ham can be enjoyed in so many ways that you’ll want to make sure you store your leftovers. You can even store pre-diced ham, so it’s ready to use for those delicious ham breakfasts, entrees, and side dishes. Ham will keep safely in a baggie or an air-tight container in the fridge for three to five days or in an air-tight container in the freezer for up to four months. You can also use a vacuum sealer when freezing foods.

Tip:  Save the ham bone after all the slices have been removed. You can use it as the base for a flavorful soup. 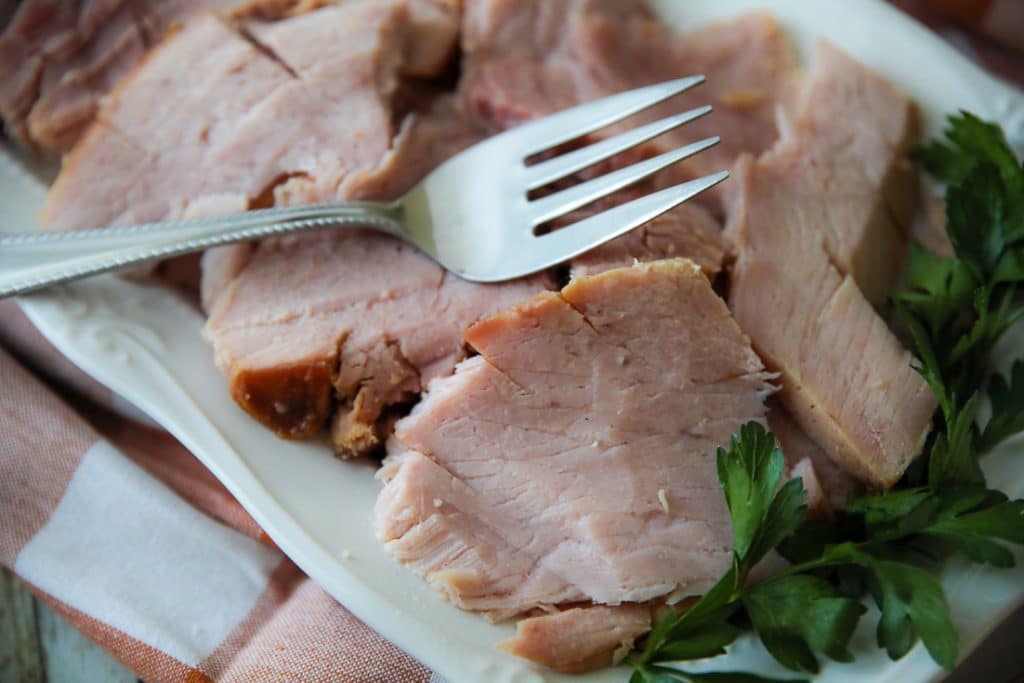 What Side Dishes Do I Eat With this Baked Keto Ham Recipe? 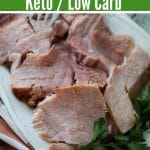 For the Keto Friendly Glaze: 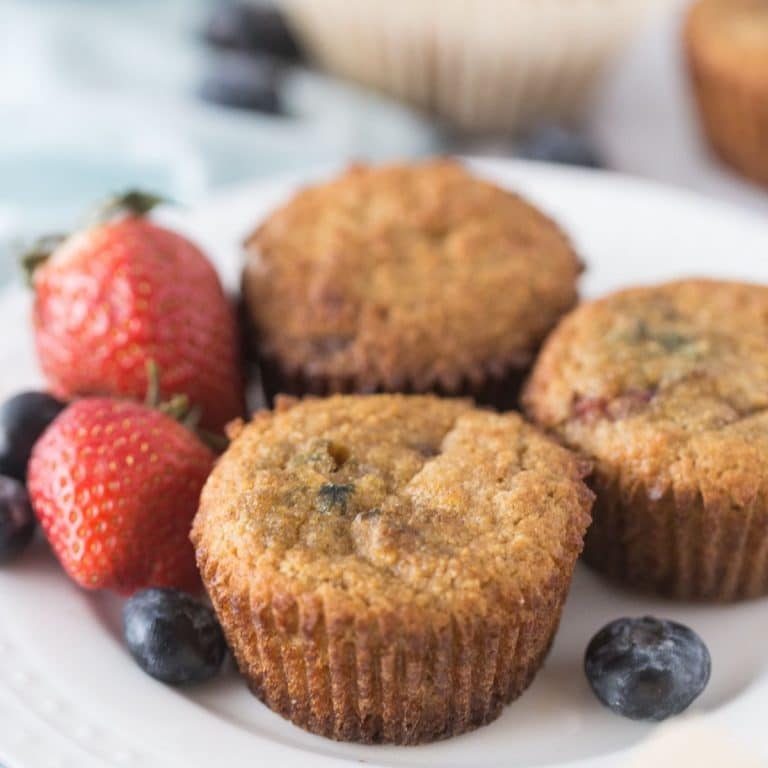 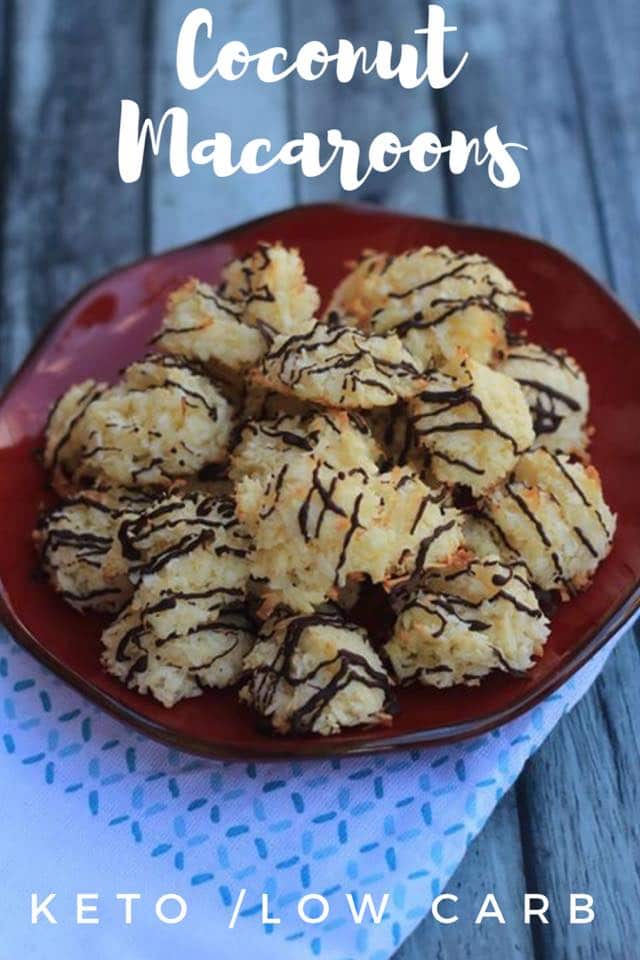 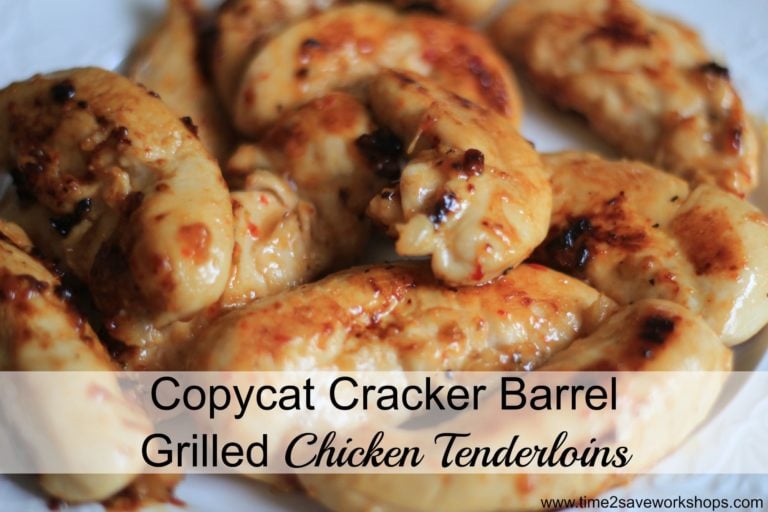 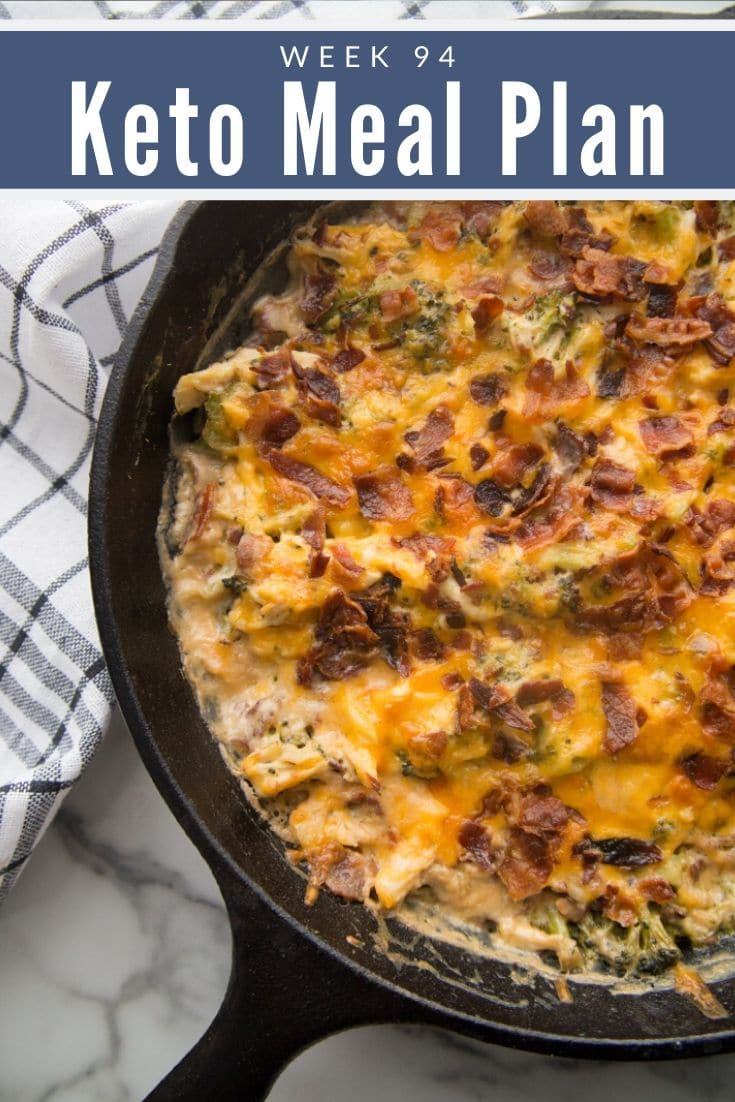 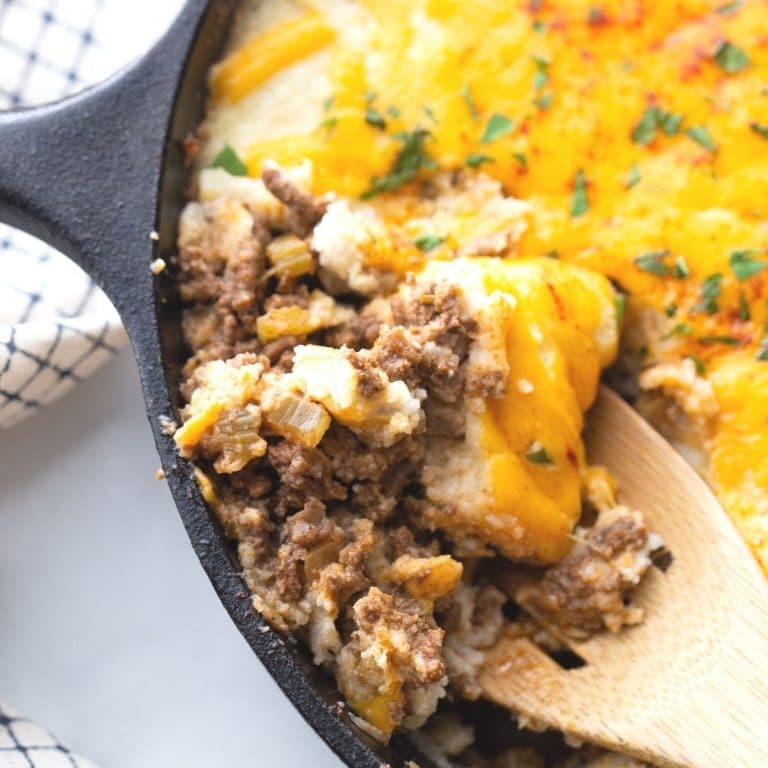