Bacon-Wrapped Mozzarella Sticks are a perfect fit for those who eat low carb or follow a keto diet! I mean, come on — cheese and bacon is a delicious combination that never gets old. Bites of mozzarella cheese wrapped in bacon make a perfect lunch, appetizer, or quick snack. 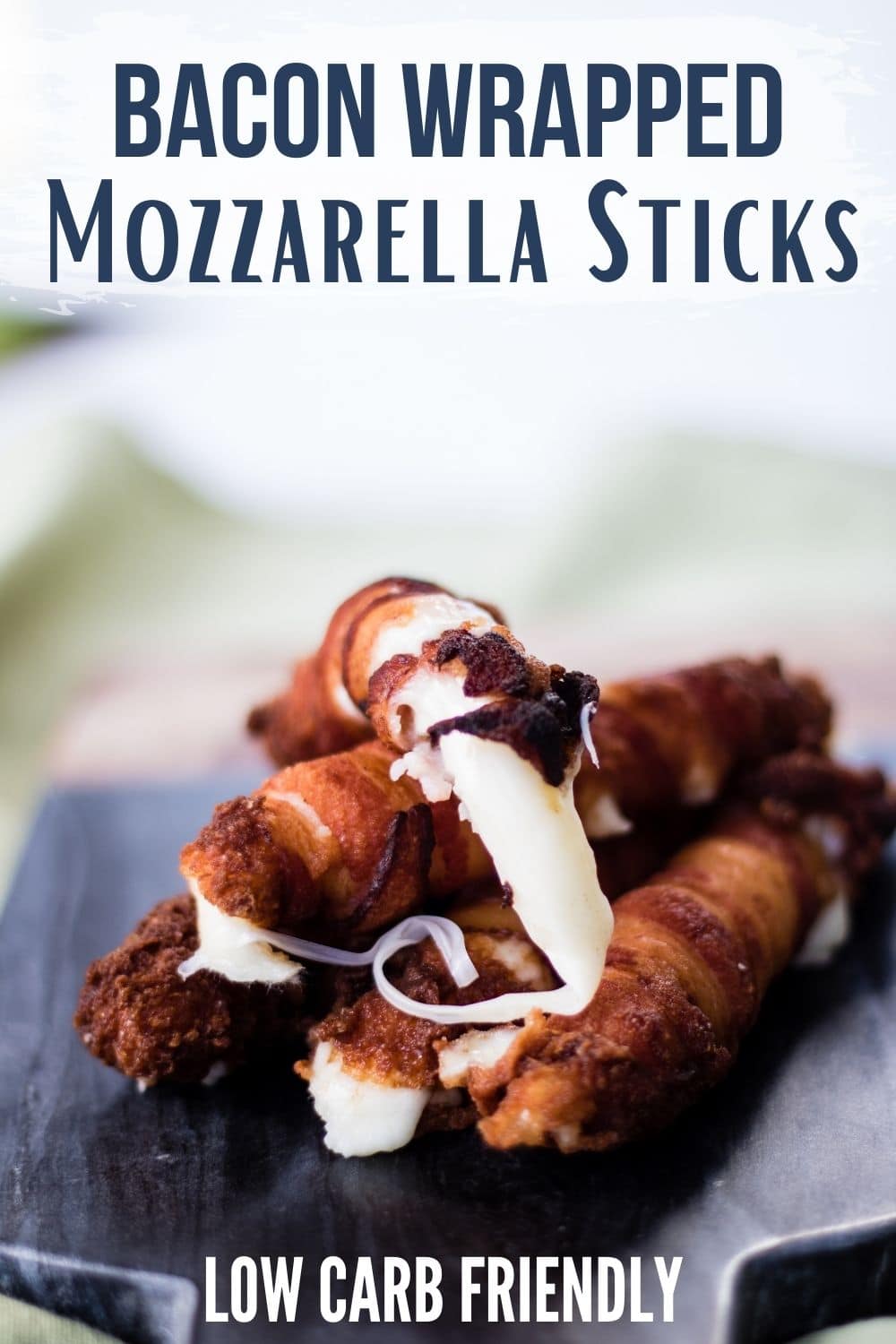 These Bacon Wrapped Cheese Sticks are so easy to make and delicious. It’s essential to follow the directions carefully for the best results. Keep this recipe tucked in your back pocket, so you’ll have it handy when you need to make a keto appetizer.

The next method I tested was bacon-fried mozzarella cheese sticks on the stove. They got crispy so much faster, preventing the mozzarella sticks from melting out! I may have cooked mine a few more minutes than necessary, but I prefer my bacon to be very crispy. 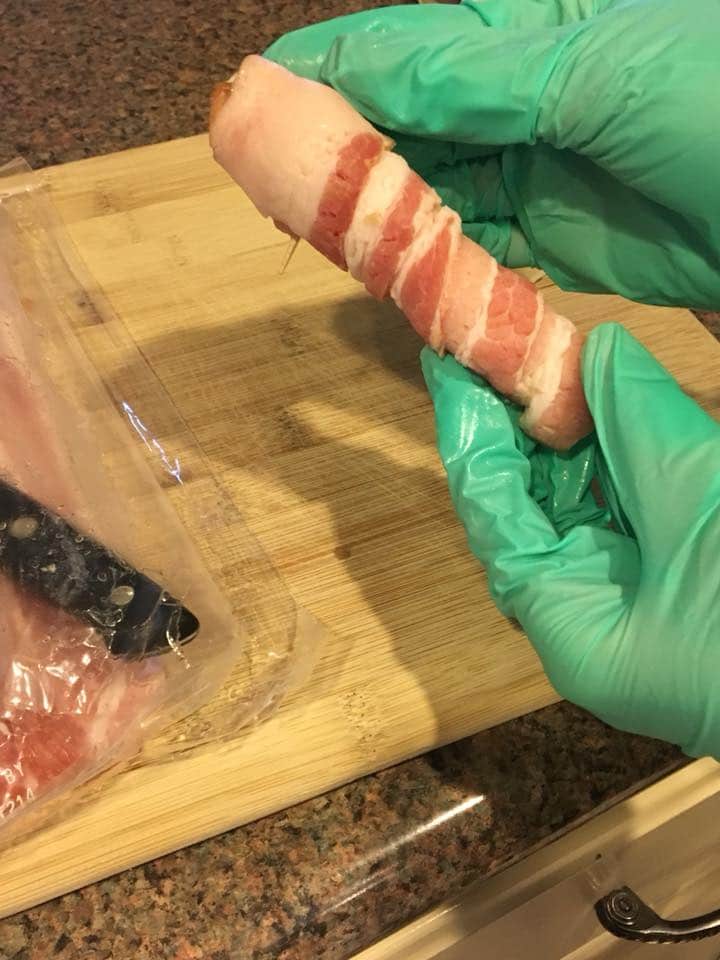 Step 1: Freeze the cheese sticks overnight. The next day, wrap a piece of bacon around each cheese stick, starting at one end and rolling carefully until the other end. I wrapped the bacon around the ends and secured it in place with a toothpick. I also tried to minimally overlap the bacon so that all of it would get crispy.

Tip: If you don’t like touching raw meat like me, gloves make this process much more manageable.

Step 2: Heat about 1/2 inch olive oil in a cast-iron skillet. Carefully place the bacon-wrapped cheese sticks into the frying pan. Turn as each side browns and crisps so that the bacon cooks on all sides.

Step 3: Remove the cheese and bacon sticks from the oil once the bacon is crispy and brown on all sides and the cheese starts to melt. Place on a plate covered with paper towels to absorb excess oil. Enjoy! 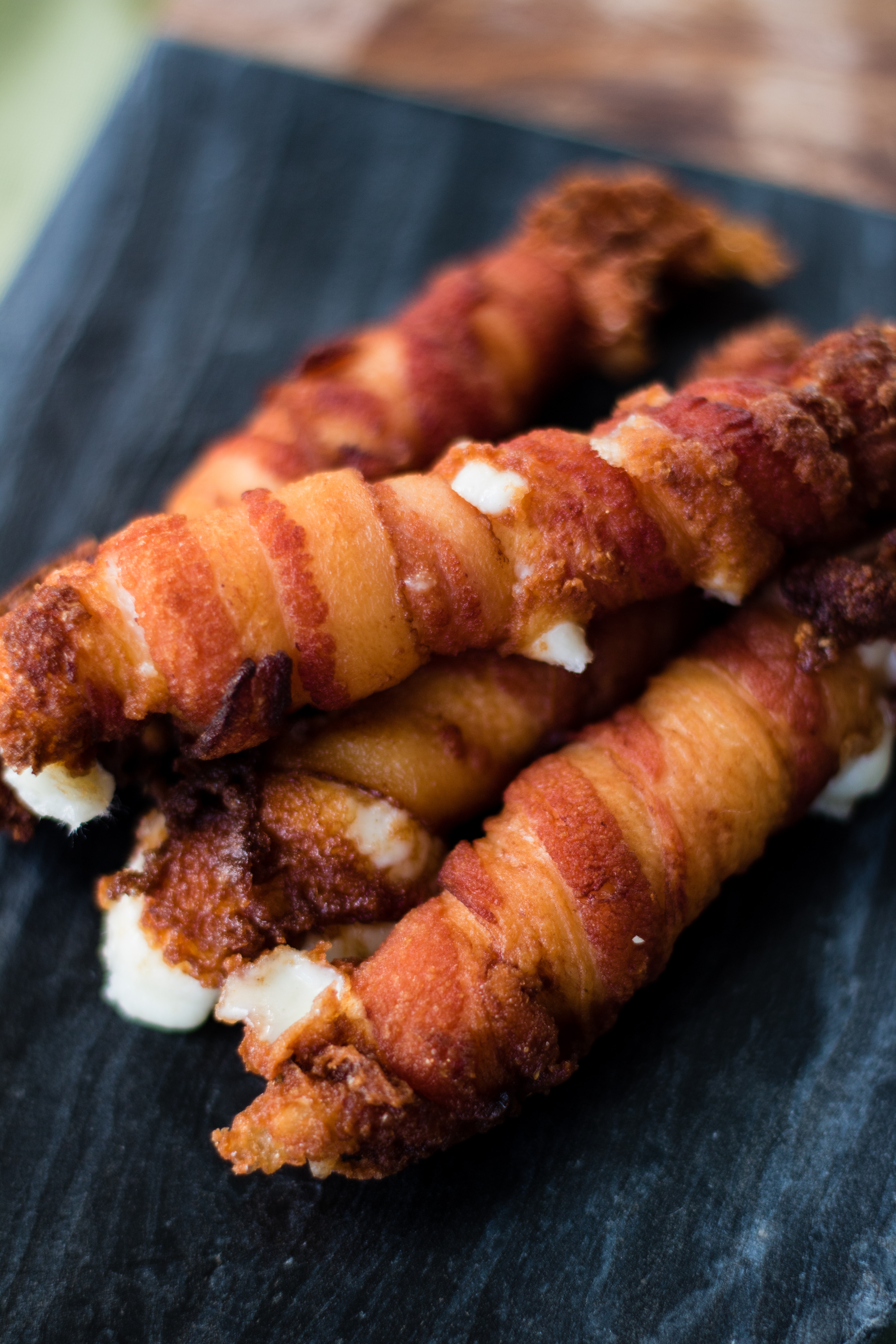 CAN I USE THE AIR FRYER OR OVEN TO MAKE THESE BACON-WRAPPED CHEESE STICKS?

While I did try the air fryer method, I preferred the result from bacon-fried cheese sticks in a cast-iron skillet. The skillet retains the heat, so they crisp nicely. I may be biased, though, since I like my bacon super crispy and crunchy! A regular skillet will work fine if you don’t have a cast iron.

Making bacon-wrapped cheese sticks in the air fryer works, as long as you don’t mind losing some of the melty cheese during the process. If you want them to get crispy faster, try turning up the temperature of your air fryer. For the bacon to get crisp and the mozzarella cheese sticks melty but intact, I would par-cook the bacon first, making stopping while it is still pliable.

I don’t personally recommend baking Bacon Wrapped Mozzarella Cheese Sticks in the oven as it would be challenging to get the bacon crisp without the cheese melting out. If you do want to try, I’d recommend a baking sheet with foil or parchment paper.

Do I Need to Freeze the Cheese Sticks Overnight?

YES!! Freezing the cheese sticks is an essential step in this recipe! When testing this recipe, the batches I made without freezing the mozzarella sticks failed miserably as the cheese would melt out of the bacon.

Tip: If you don’t have time to freeze the mozzarella cheese sticks overnight, several hours should be sufficient.

Yes! Depending on the brand of bacon you are using, this low-carb appetizer could have zero carbs as mozzarella cheese sticks don’t have any carbs either. The nutritional information lines up with a keto diet being high in fat and low in carbs. In fact, the net carbs in this recipe, depending on what bacon you use, can be zero. 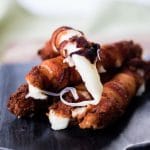 I included 1/4 of the avocado oil in the nutritional information as most of it was left in the pan. 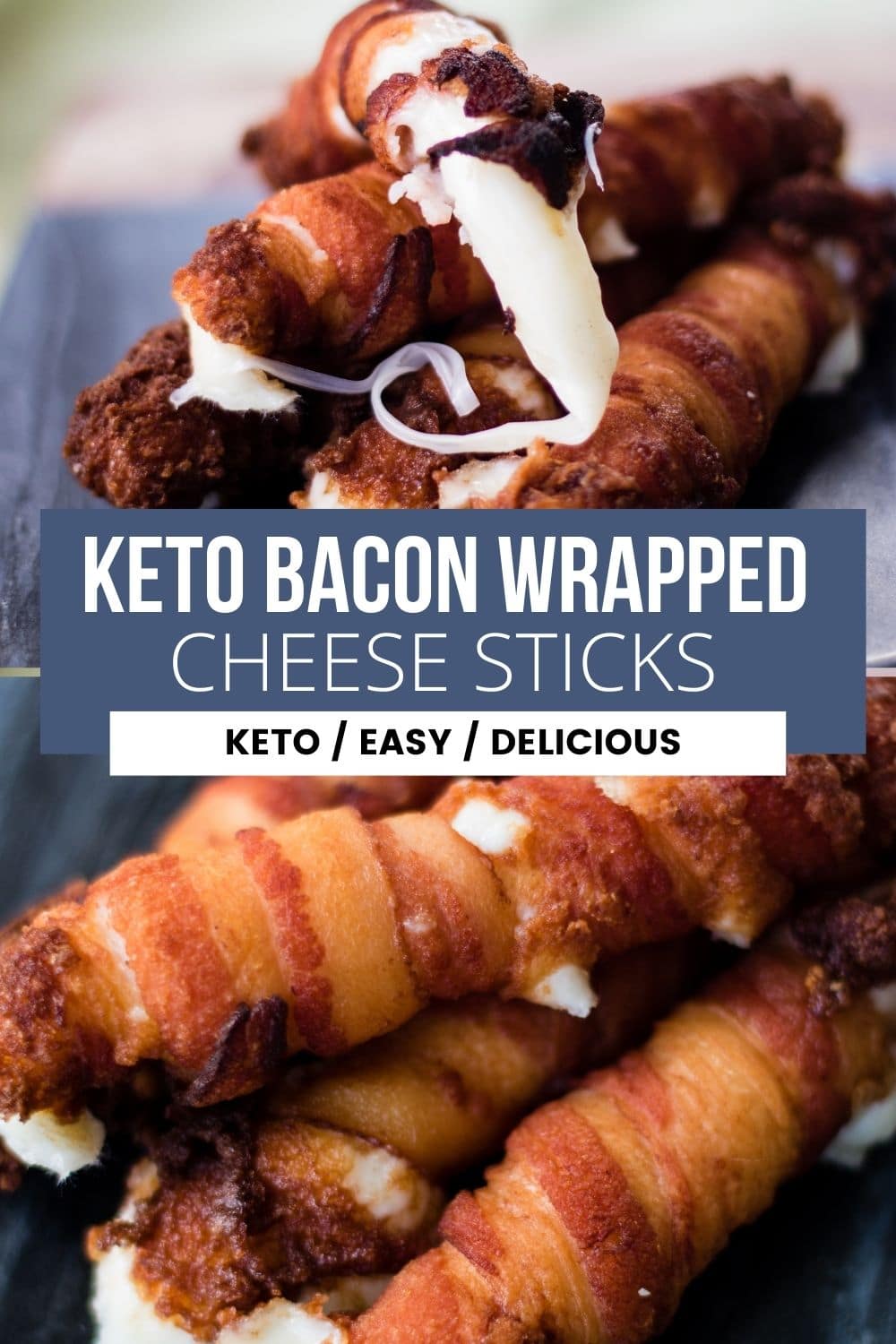 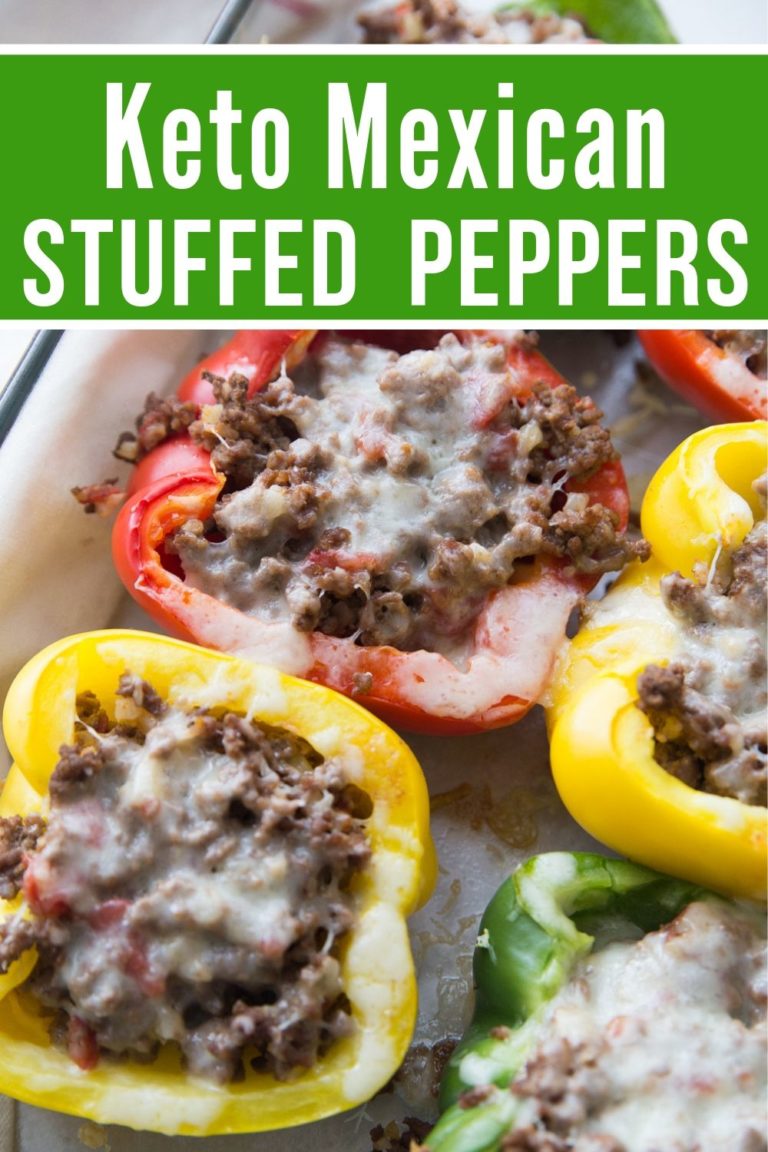 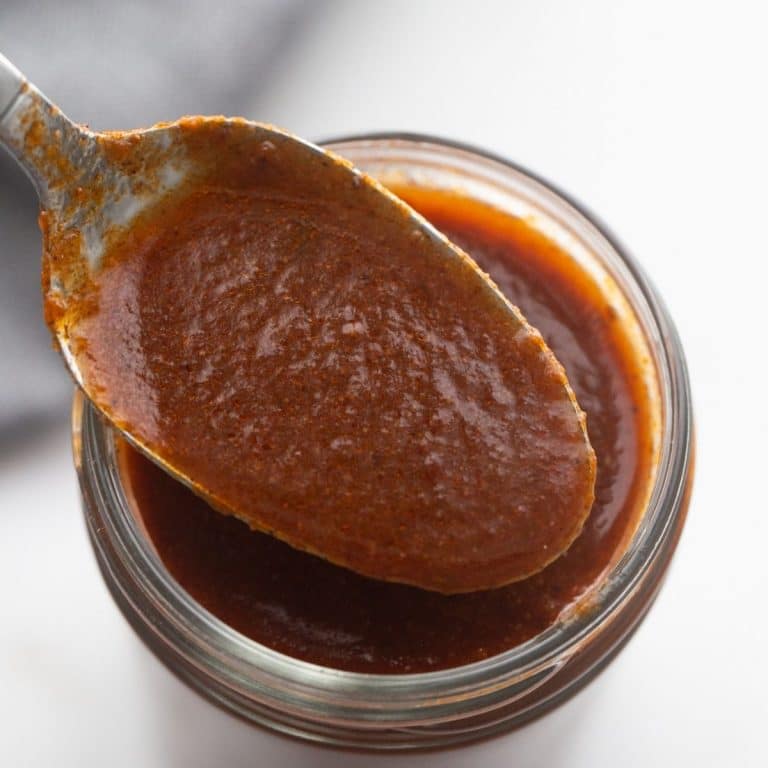 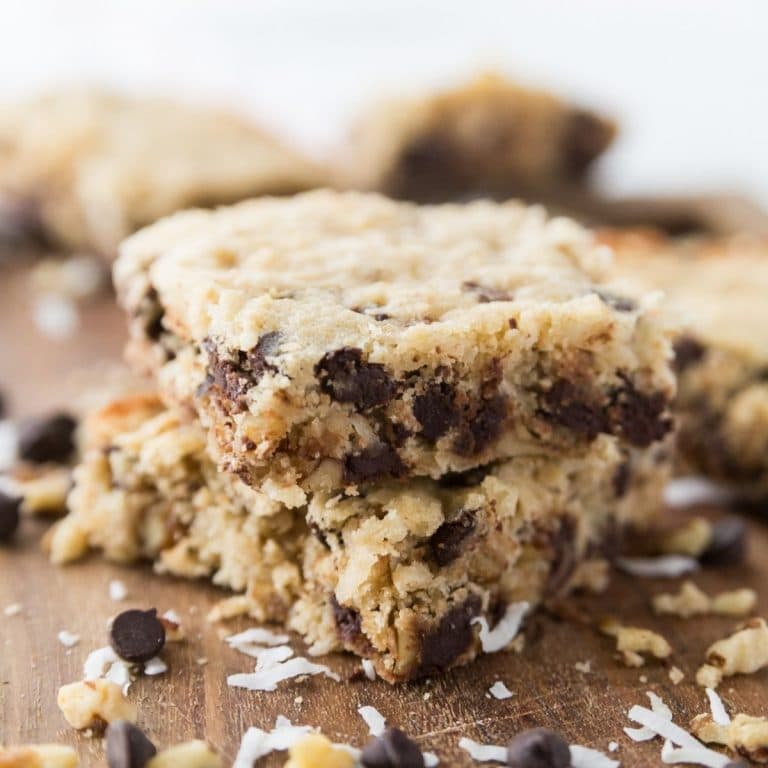 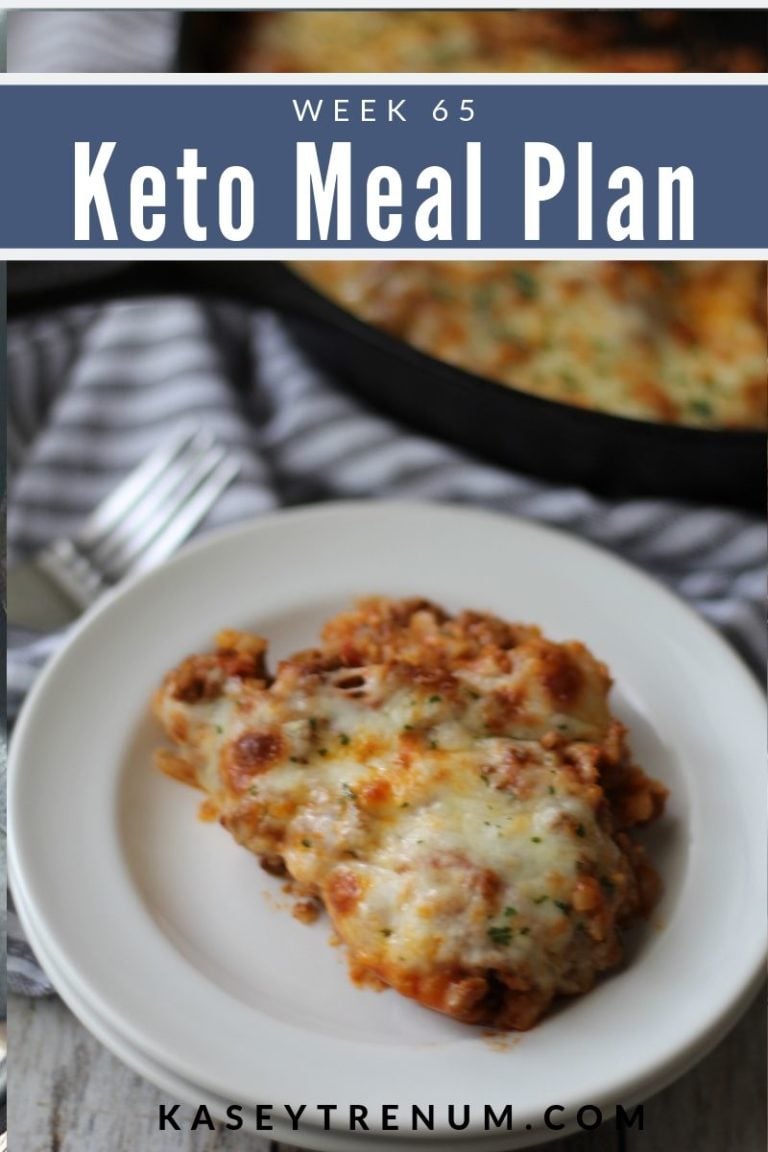 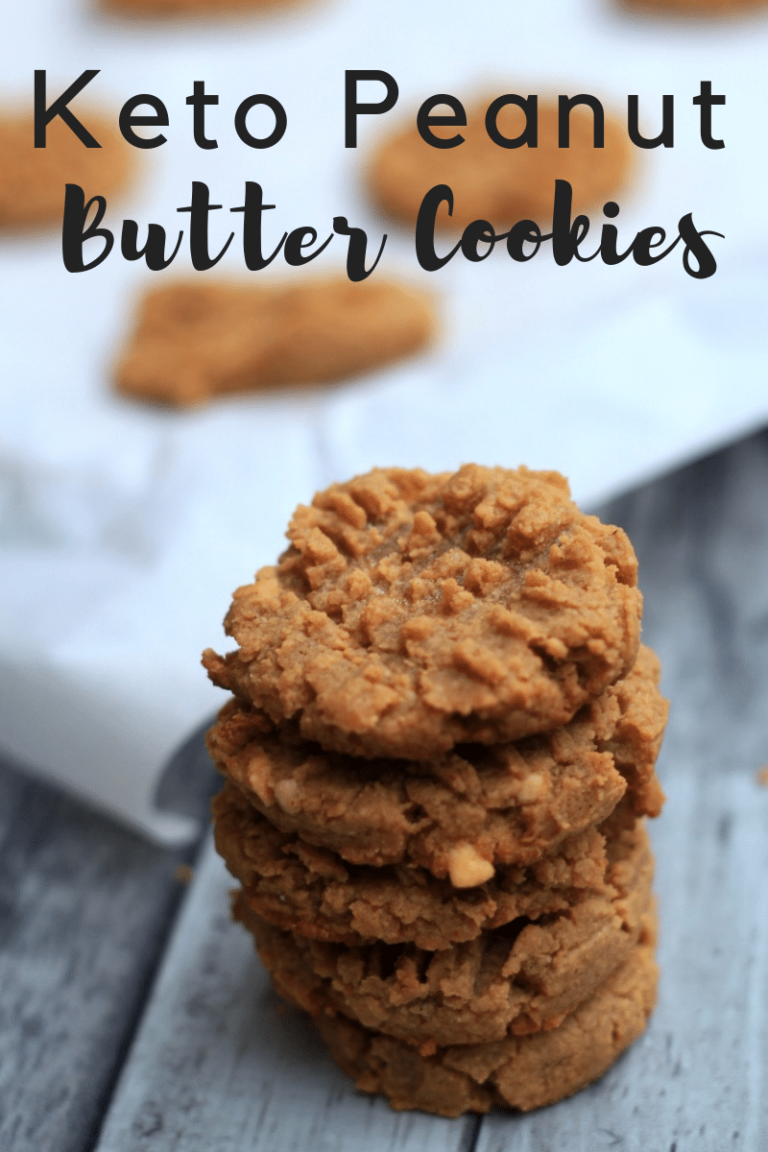 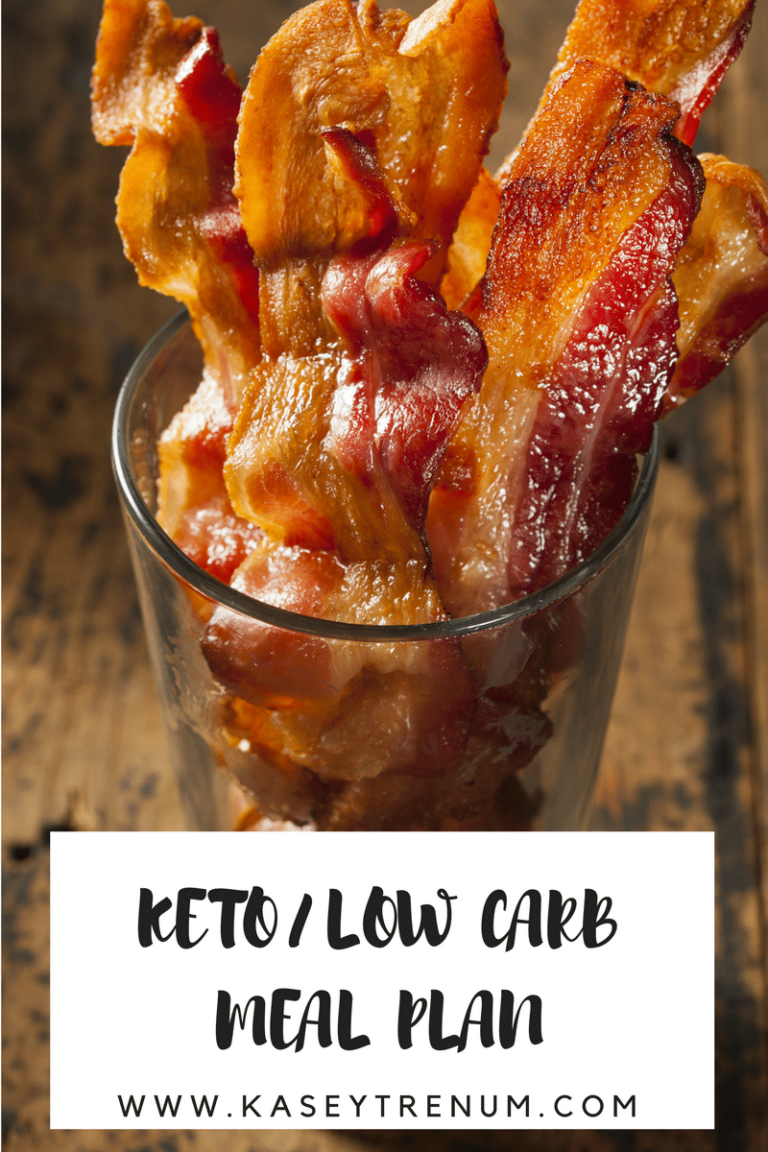